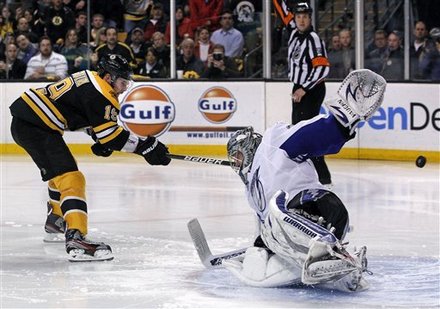 Have you caught your breath yet? The Bruins' 6-5 victory over Tampa had enough action to fill two games, with enough left over to start a third. So many big goals, big saves, big hits. And a little bit of luck for the Lightning. They got some favorable bounces, maybe even a few favorable calls and non-calls that helped keep them in this game. But also give credit to them for taking advantage of such opportunities.

Tyler Seguin is an assassin; an errand boy sent by grocery clerks. To collect a bill. He finally got a chance to play, and play with some skilled players. And it worked out. His speed, his skills, his shot. He's only 19, but he's the fastest skater and best shooter on the Bruins. He is simply a stud. Thank you, Mr. Kessel, wherever you are.

He was assisted by Michael Ryder, and he also assisted Ryder. Ryder was excellent in all three zones. His defensive play was actually better than his offensive play, even though he scored twice with an assist. I've never doubted Ryder's skill or his potential. It's just the inconsistent application of that skill. When he's motivated and focused, he's a top-flight player in this League. He just needs to maintain that effort and focus for an extended period of time. 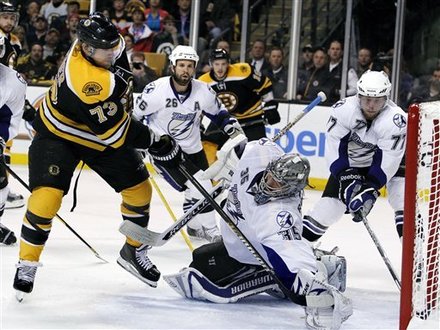 David Krejci had one of his best games in a Bruins uniform last night. The stat-line shows that he scored and was -1. But he played over 24 minutes. And he played 24 tough minutes. He was called on to replace Bergeron on the Penalty Kill, and he did a good job of it. No other Bruins forward came close to him in ice-time (Lucic had just under 21 minutes, Horton was under 19, then Kelly had 16:28).

Lucic and Horton were keys to turning the Power Play around. Their net-front presence disrupted Roloson enough to allow that first PP goal. And of course Horton had a 3 point night.

Even though he allowed 5 goals, Tim Thomas had a good game. He allowed one or two softies, most notably a big 5 hole goal in the 2nd period. But he also stoned many Tampa Bay breakaways.

Tampa's first two goals came thanks to funny bounces. One off the boards, one off Boychuk. Tampa also scored a goal that rebounded off Timmy's face, which is why his sweater and face had blood stains on them for the remainder of the game.

I don't know the NHL's review rules by heart. But I do know that there are several things that can be reviewed "in theory." For instance, in review, a play can be deemed dead before a whistle was blown, if the reviewer deems that the referee "intended" to blow the whistle before it was blown. Also, goals can be allowed even if the goal slips off its pegs, if it's deemed that the puck would have gone in anyway, and the goal was dislodged by a defending player.

Typically, refs blow the whistle when a goalie's helmet comes off. And while the ref may have missed Thomas' helmet being removed, the replays showed that he was without a mask when the puck went in (after ricocheting off his face). Then again, I can't find any rule stipulating that a whistle should be blown if a goalie's mask comes off. Maybe there should be one as the unwritten rule has been enforced for some time. 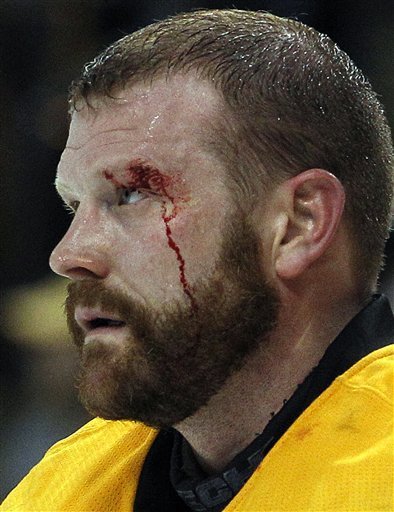 The Bruins still struggled with neutral zone giveaways, although nothing on the level of Kaberle's in Game 1. Mark Recchi, of all people, seemed to be unable to get the puck deep into the Tampa Bay zone.

But the Bruins showed discipline in the post-whistle scrums. And I actually think they were unfairly penalized more than once when they held their temper. Ference, for instance, sprayed Roloson with some snow (which I've seen countless forwards do countless times in the playoffs), then he gets decked to the ice, but somehow winds up with a matching minor. Steve Downie blatantly antagonized Chara. Chara kept his hands down, until Downie face-washed him and Chara returned the favor. And to be frank, the fact that Downie survived the confrontation is evidence that Chara didn't intend any significant harm. But again, there were matching minors.

The Bruins did take some stupid penalties. Horton took an interference, and an elbowing call, that were both unnecessary. The B's are up against the best Power Play left in the playoffs. They don't need to be doing Tampa any favors.

One thing that helps is the penalty killing of guys like Daniel Paille. Paille only played 8 minutes, and 2:37 shorthanded. But what a 2:37 they were. His PK forecheck in the 1st was highlight reel material for true fans of the game. One man tying up a stellar Power Play for about 25 seconds. Contributions like that can be the difference between winning and losing. 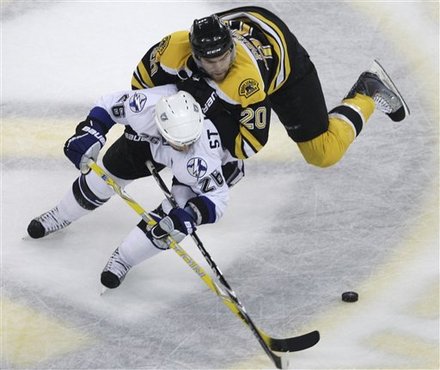 Game 3 is Thursday night, and I can't wait. We saw the Lightning get a little flustered at times last night. We saw the Bruins pin them and the puck to the boards for extended stretches. The best way to stop open ice breakouts is to keep the puck and the opponent up against the boards. We also saw the emergence of Tyler Seguin as a weapon.