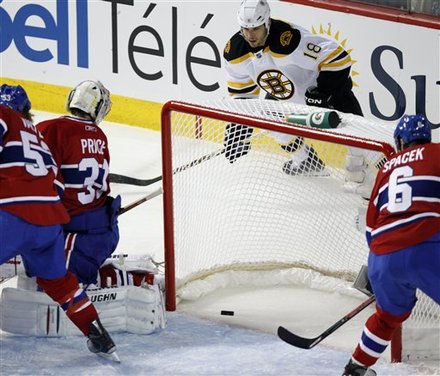 The Bruins looked so much looser last night in Montreal. Maybe that's why they're so good on the road. They made a few mistakes (a too many men penalty, for instance), but nothing as grievous as their giveaway gifts in Games 1 and 2. The offense played with more intelligence, and the defense was sound. The result was a 4-2 victory.

The offense wasn't amazing. They just made better decisions. They didn't let Price play the puck too often. And the one time they did, Peverley did a great job of charging the net, and was in perfect position to capitalize on a rare Price error.

The B's didn't score highlight reel goals. In fact, they squandered three different 3-on-1 opportunities. The goals were opportunistic, and a bit lucky at the end. Though that luck came after some solid play. That's how it works in the playoffs. Montreal's 2 goals were similarly fortunate, a pair of seeing eye backhanders that found Thomas' minuscule 5-hole.

The defensemen were excellent on the other side of the ice. Chara returned, and wasn't as physically commanding as we're accustomed to, but was still solid. Ference, Seidenberg, and Boychuk were all excellent. As was Bergeron. 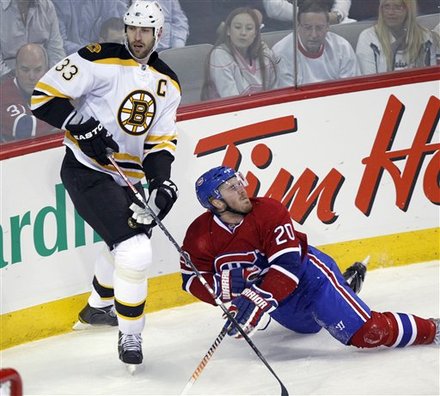 Krejci finally did something, scoring thanks to a perfect pass from Bergeron and some good play by Seidenberg. Horton got a right place, right time goal. I'm still waiting for Lucic to show up. He had a nice steal off Subban which gave him a breakaway opportunity. But he's still drifting around, hoping for something to happen, instead of making it happen.

The power play has yet to score. Last night, the Bruins either struggled with entry, or made silly plays in the offensive zone, not valuing possession. Marchand's no-look pass behind him, which allowed Montreal to clear, for example.

Thankfully, Montreal's power play hasn't been very effective either. They've scored once in 12 chances. Last night Bergeron, Paille, Boychuk, Campbell, Chara, Seidenberg, Marchand, and Kelly all played great on the PK. It's no coincidence that two of the Bruins goals came just after big penalty kills. Now if only the PK can maintain that, and the power play contribute just an occasional goal here and there, this series would flip on its end.

I'm tired of seeing Michael Ryder on the ice (and have been for 2 years). Why not give Seguin a shot?

The officiating in the series has been dreadfully inconsistent. But that's what happens in the first round of the Stanley Cup Playoffs. The refs are still figuring out what to call and what not to call. Holding is never called (except on Recchi last night). The leeway for interference expands. But negligible hooks still get called. It is what it is. Thankfully, the refs didn't buy all of Montreal's diving last night, and swallowed their whistles in the last 5 minutes.

So the good news is the series will come back to Boston. Maybe that's bad news too, considering the Bruins' road record. Game 4 is in Montreal on Thursday night.