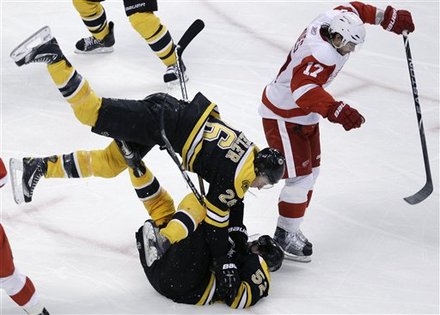 What have we learned about the Bruins the last few days? They're better than Montreal. They're good. But they're not great. They're only borderline very good when all their players are at their best. Against a high quality opponent, in a playoff-style game, they're likely to lose.

Friday's 6-1 loss to Detroit was a bit of an aberration. Rask let in a few soft ones, and maybe there was a hangover after the Canadiens game. Sunday's 4-2 loss looked much better. The Bruins weren't dominated, but they were outclassed.

Sunday was like a playoff game, especially in the 2nd period. It was high paced, it was close, it was physical. Not the fighting kind of physical we saw against Montreal, this was trench warfare in the corners and in front of the net.

Detroit won most of those battles in the trenches. And even when the Bruins won theirs, they didn't do much to capitalize.

A pair of mistakes by rookies allowed Detroit to score twice. Marchand's giveaway, and Seguin not covering Draper. Mistakes by 22 and 19 year olds are forgivable. Also, give credit to guys like Bertuzzi and Draper, who took advantage of those mistakes.

That's something that struck me. The Red Wings don't have an All-Star team. But they do deploy a ceaseless string of solid, well-rounded players. Eaves, Holmstrom, Bertuzzi, Hudler, Helm, Draper. These are the guys behind Zetterberg, Datsyuk, Franzen, and Cleary.

That's nine forwards right there. All solid. All capable of multiple things. Compare them to these nine guys: Lucic, Bergeron, Ryder, Marchand, Horton, Recchi, Krejci, Wheeler, Seguin. Detroit's is clearly better. Guys like Ryder might have 16 goals, but I'd take Kris Draper over him in a heartbeat.

Detroit didn't dominate. In playoff-style games, nobody ever dominates. But they were clearly superior in execution. That's nothing to be ashamed of. Detroit's 2nd in the West, and one of the best franchises in the NHL. Though it's hard to imagine a deep playoff run if the Bruins are so easily outclassed in playoff-style hockey.

It might be time to start worrying, as well. The B's have dropped 3 of 4, and are 5-5 in their last 10. They have an opportunity to rack up some points, though, as they'll face the 5th, 3rd, and 2nd worst teams in the NHL this week. They'll start with the Maple Leafs Tuesday night.

But in a few months, when this team is up against a quality opponent in a 7 game series, I don't think they're good enough to pull it off. This is a Conference Semifinal team, and nothing more.