It's an unfortunate end to Spaz's tenure at BC. He's been with the program since 1997, first as a runningback coach, then as the defensive coordinator for 10 years. He was promoted to head coach in 2009.

The BC football program wanted a guy whose ultimate career goal was to be the head coach of BC football. That was not a wise philosophy. Almost all programs in the country are stepping-stone programs for coaches aspiring to raise themselves to the NFL level or to the mega programs like Alabama and Texas. There's no shame in being a coach's resumé builder, so long as the program is successful.

Some candidates to replace Spaz include Harvard coach Tim Murhpy. The Crimson finished the year 8-2. Miami coach Al Golden is another possibility. So is Notre Dame defensive coordinator Bob Diaco.

Whoever the new coach is, they inherit a program that needs a major overhaul. I'd like to see BC implement a more modern offensive style. Not only would it be entertaining, it would attract skill position players who would be drawn by the idea of more chances to get the ball and more chances to make plays.

BC also needs a coach who can recruit from top to bottom. BC is never going to attract the elite blue chip prospects, so they must get depth, and find talented players that are overlooked by other programs.

It was only a few years ago that BC was ranked as high as #2 in the country, and annually contended for the ACC title. It's possible to return to those days, it will just take time.

Why Notre Dame Linebacker Manti Te'o Should Win the Heisman

Let me preface this argument by saying that I don't like Notre Dame. I hate Notre Dame. I do get goosebumps while watching Rudy but apart from that I'm vehemently against anything that glorifies or promotes or helps Notre Dame in any way shape or form.

That being said, I think Manti Te'o, a linebacker for the Fighting Irish, should win the Heisman.

Anyway, my argument for Manti Te'o to win the Heisman is two-pronged. Firstly, there is no clear-cut offensive candidate to win the Heisman. Secondly, Te'o does something that is a rare accomplishment for defensive players.

There is no RG3 this season. There are some fine Heisman candidates with impressive stats. Although few of them are on teams contending for a national title. And none of them are especially outstanding. Johnny Manziel of Texas A&M has had a fine year, but he's not amazing. Collin Klein of Kansas State is a dual threat QB, but that's nothing new. Marquise Lee is a ridiculously talented wide receiver who probably deserves it more than any QB, but he's still a receiver dependent on a talented passer to deliver the ball to him.

So there's no outright offensive player who has a strong claim to the Heisman.

Here is why Manti Te'o should therefore win it: He controls the game on defense. That is exceedingly difficult to do. It's easier for a quarterback, who handles the ball almost every down, to control the game. But for a defensive player to exert as much influence on the game as Manti Te'o does is simply extraordinary.

Te'o would be the first defensive player since Charles Woodson in 1997 to win the Heisman. The award is almost never given to a strictly defensive player. Even Woodson returned punts and played a few snaps as a wide receiver.

But considering there's no clear offensive candidate, and that Te'o is the best player on a #1 team, and that he controls the game as much as any defensive player could, I think he deserves the trophy. 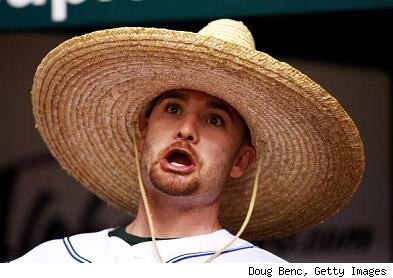 When the very first thing people say about an athlete is something about their character, you know that said athlete probably isn't a particularly talented player. That's the case with Jonny Gomes. John Tomase of the Boston Herald wrote about Jonny Gomes's character giving the Red Sox a "face-lift." Boston.com's Extra Bases said Gomes "has some personality."

Meanwhile, Baseball-Reference.com says Jonny Gomes is a .244 hitter who averages 25 homeruns every 162 games he plays, but has only played more than 120 games once in his career.

The Red Sox signed Gomes to a two year deal worth $10 million. He's a platoon player and the Sox threw $5 million a season at him. Why not?

It's not a horrific move. And $10 million over 2 years hardly handcuffs this team's finances. I just enjoy certain members of the Boston Sports Media sucking up to the Red Sox and praising Jonny Gomes's character.

Character and clubhouse chemistry are products of winning on the field. And pitching determines success on the field. You could put Mother Theresa and Rudy Reuttiger in the 2011 Red Sox clubhouse and they'd still collapse.

But I'm sure signing Jonny Gomes to a $5 million salary has nothing to do with Ben Cherington's weird promise that the Sox will have a big payroll. I'm sure it was strictly a baseball move.
Posted by rob at 12:00 PM No comments:

BC Hockey Grinds Out Win Over Dartmouth There was an unofficial ECAC/Hockey East challenge over the weekend. Merrimack and Colgate tied 1-1, St. Lawrence beat Northeastern 5-2 then lost to BU 4-0, Quinnipiac and UMass tied 2-2, UMass-Lowell beat Princeton 3-1, Providence crushed Brown 7-0 in the Mayor's Cup, and BC outlasted Dartmouth 6-3. So Hockey East won this interconference challenge 4-1-2.

Boston College and Dartmouth (who were ranked 11th coming into the weekend) played a tight, very physical game. The 6-3 final score doesn't do justice for how close of a contest it was.

It was 3-3 going into the final period. For the first 40 minutes the puck spent most of its time near the boards as BC and Dartmouth jousted for possession. There were a few breakaways, but few clean offensive opportunities. Stringing together more than two passes in the middle of the ice was next to impossible.

BC's firepower won out in the 3rd. Pat Mullane scored his 2nd goal of the game 18 seconds into the period. Then Steven Whitney scored his 7th of the season for insurance. Johnny Gaudreau added an empty-netter. He finished the game with 2 goals and 3 assists.

The victory was Jerry York's 923rd career win. He is now 1 shy of tying the all-time record for college hockey wins, held by Ron Mason. BC plays at BU on Friday, then hosts BU Saturday night. Both games will be televised nationally on NBC Sports. 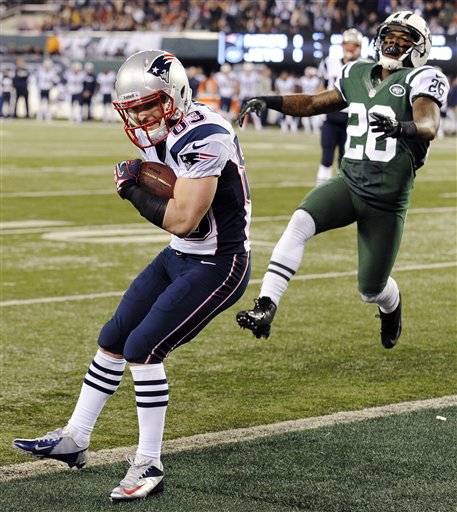 I was thankful for many things on Thanksgiving. Friends, family, food. And I was thankful for a stress-free fourth quarter in a Patriots game. Because the game was over by halftime. 35 points scored in the 2nd quarter, 21 of which were scored in less than a minute. I've never laughed harder in my life.

The Jets are an awful team. So beating up on them is sort of like Oregon beating Idaho State. It's a good win, but the caliber of opponent isn't very high. The Jets are not a measuring-stick team.

Now they have a few extra days off before a trip to Miami, where they can clinch the AFC East title with a win. Potential hat and t-shirt game Sunday at 1.