The jock sniffers on Obnoxious Sports Fan and Masshole Sports decided to give Brady fashion advice, even joking about Gisele dressing him. I'm sorry, but anyone whose idea of formal wear is their silver Patriots jersey shouldn't be giving attire advice to a guy married to a model.

And how dare he speak to Kobe Bryant. Doesn't Brady know that Kobe is the enemy?

Unfortunately, people don't want to realize that Tom Brady has more in common with Kobe Bryant than he does with any Celtics fan. Or any Patriots fan. Us paying hundreds to see these guys play doesn't make them like us more, it makes them less like us.

I'll stick to criticizing Brady for his mistakes on the field, not for any fashion faux pas or for chatting with a fellow millionaire athlete.
Posted by rob at 1:00 PM No comments:

BC grinded out two very physical games against UMass, winning their 12th and 13th straight games. BC also now has a 10 game winning streak in this tournament. The Minutemen are big and can skate, which forced BC to play out of their comfort level. UMass tried to keep the game along the boards, but they lacked the finishing touches on scoring chances. BC beat them 2-1 then 3-2. BC is in the semifinals for the 8th straight year.

BU needed 11 periods plus 8 minutes to beat UNH in a series that twice went into Double OT. It was a marathon series with 228 minutes of grueling hockey played. Kieran Millan made 68 saves in Game 3. At one point the Terriers were down 4-1, they tied it at 4-4 and the 3rd, and Alex Chiasson won it in the 2nd OT. The series was just the latest in a long series of dramatic events for the BU hockey program this season.

Maine likely eliminated Merrimack from the NCAA Tournament by beating them 2 of 3 up in Orono. The NCAAs only have 11 at-large bids and right now Merrimack is ranked 17th in the PairWise Comparison Rating. Maine solidified their standing, but could use a win against BU to really feel safe.

Providence advanced to the Hockey East semifinals for the first time since 2001 by upsetting UMass-Lowell. The Friars ended the regular season with two losses to UML, but were able to beat them Thursday and Sunday night. They'll play BC, who they lost to twice before losing to UMass-Lowell twice.

The semifinal round will be played Friday night at the TD Garden. The games will be on NESN.

The Championship game will be played Saturday at 8:00pm.

Also, Harvard beat Yale two out of three to advance to the ECAC semifinals in Atlantic City. They'll play Cornell on Friday.
Posted by rob at 12:00 PM No comments:

The Bruins have so many names on their injury report that we need a whole post to talk about them.

Benoit Pouliot also has a lower body injury and seems to be day-to-day.

On the bright side, Andrew Ference returned to the lineup this weekend. Tuukka Rask seems optimistic that he'll be healthy for the playoffs. And Daniel Paille worked out with the team over the weekend.
Posted by rob at 11:00 AM No comments: 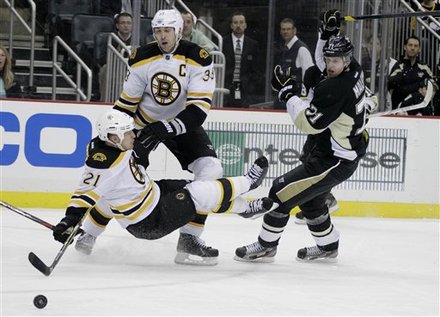 The Pittsburgh Penguins are the dirtiest team that is never called dirty. From Matt Cooke to Geno Malkin. They play with reckless abandon. And fine for them, but karma will keep concussing Sidney Crosby until the Penguins repent and change their ways.

The Malkin hit on Boychuk probably won't result in a suspension. Brendan Shanahan will make a video explaining how the head wasn't specifically targeted, Boychuk dropped his right shoulder, Malkin's a great guy, and the lack of a center redline was somehow the true culprit.

All that aside, the Bruins didn't respond to the hit. That pissed me off more than the hit itself. I wanted to see Shawn Thornton on the ice the second Malkin was released from the box. Charge him. Crosscheck his Bolshevik face. Malkin remained literally untouched for the remainder of the game. I'm not saying the Bruins should have tried to injure him. But make him pay a higher cost than just the paltry 2 minute minor and the friendly phone conversation he'll have with Shanahan. Make him feel some pain.

The B's felt pain all weekend. And watching them was equally torturous.

Why the hell did Tim Thomas start both games? He's shown clear signs that his energy levels are below 100%. At his best, he moves around the crease with ferocious grace. He's never out of the play because he's so quick to recover his balance. Actually, he never seems to lose his balance, no matter how he contorts himself. Lately, he hasn't been able to recover and make that second save. He needs rest. More importantly, the Bruins need him rested. The playoffs start in less than a month.

If Thomas doesn't get some rest right now, all the Bruins will have plenty of rest in May.

Turco did well. The silver lining of Thomas and the Bruins struggling in yesterday's 1st period was that now we all know Turco isn't a liability. He's a windmill. Before the Bruins signed him, he was working part time as an obstacle on a mini-golf course. 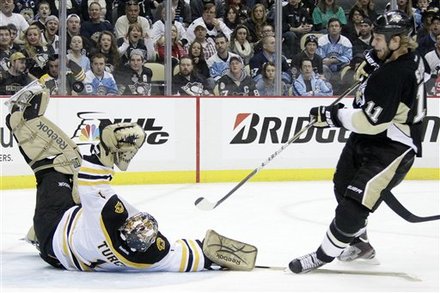 So with Turco, Thomas can rest. There are 15 games left, I'd like to see Thomas play about 8 of them. 10 at the most. This team is finding ways to lose no matter who is in net.

David Krejci's afternoon in Pittsburgh was a good summary of the Bruins' struggles. He scored 2 goals, but his +/- was 0 for the game. His offense was excellent, but he was inconsistent on defense. He got mesmerized by the puck, forgot to cover Kunitz in the slot, and a goal resulted. He won 12 of 22 faceoffs, but was utterly dominated by Malkin (who won 15 of 20). A nice 2 goals, but a costly mistake, and a failure to do some of the little things that win games.

That's been the Bruins since the start of 2012. Occasional brilliance mixed with inexcusable breakdowns.

The Canucks played 107 games last year too. They have the 3rd best record in the NHL. And the Penguins have been without Crosby for some time. The Rangers are without Callahan. The number of injuries for the Bruins right now is considerable, but when this stretch of poor play started they were quite healthy.

The Bruins were outmuscled yesterday. Worse than that, they're making horrible decisions. They haven't scored a timely Power Play goal in what seems like months. Every good period of play is sandwiched by two periods of bad play.

The Bruins are 2 points ahead of Ottawa with 2 games in hand. And right now those 2 points are the difference between the #2 seed and the #7 seed.

The B's are in Tampa Tuesday night.