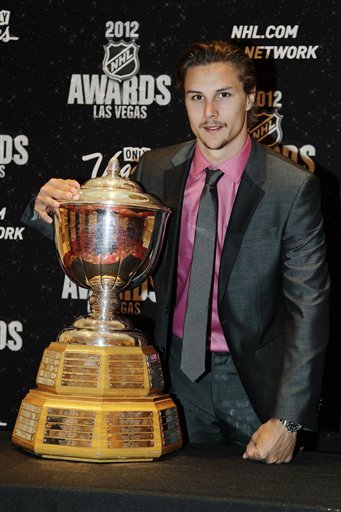 The Norris Trophy is given to the NHL's top "defense player [defenseman] who demonstrates throughout the season the greatest all-round ability in the position." Frequently, however, it is given to the defenseman with the most points.

There's no denying Karlsson's offensive prowess. He led all defensemen with 78 points (25 more than 2nd place). He scored 19 goals, which tied with Weber for tops among defensemen. And he had 59 assists, 10 more than any other defenseman.

But if you were starting an NHL team, who would be the first defenseman you'd take? For me, I'd take Chara. Shea Weber would be my second choice. As talented as Karlsson is, I would rather have a defenseman that can play defense first, then contribute on offense. And maybe the 22 year old Karlsson will one day be that all-around player. But not today.

Karlsson was a +16, which isn't bad, but Chara was +33. Weber was +21. And to those who might argue that +/- is a team stat, so are assists. And assists are what gave Karlsson the offensive edge over Weber. They both scored 19 goals.

How does someone who doesn't kill penalties be deemed the best defenseman in the NHL?

Maybe Chara and Weber split the old school vote. Anyone who voted for Chara would probably pick Weber in a head-to-head contest against Karlsson. Weber lost to Karlsson by a slim margin. 1,069 to 1,057.

Maybe the voters wanted first-time winners. Chara was a distant 3rd in the voting, but I think he should have won. He won the Norris in 2009 and these awards seemed to be about new faces. Every other trophy was won by a first-timer.

I think the NHL needs an additional trophy. They need a reverse Selke, which is awarded to the best defensive forward. They need a trophy for the best offensive defenseman. Call it the Orr Trophy. Then guys like Karlsson can get recognition for their offensive contribution without siphoning accolades from all-around defensemen like Shea Weber and Zdeno Chara.

To Chara's credit, he had this to say about Karlsson:

"Well, he's obviously having a great year and very productive. He's got unbelievable skills so I would like to congratulate him."

And also said this about Bergeron winning the Selke:

Is it too late to nominate Chara for the 2013 Lady Byng? 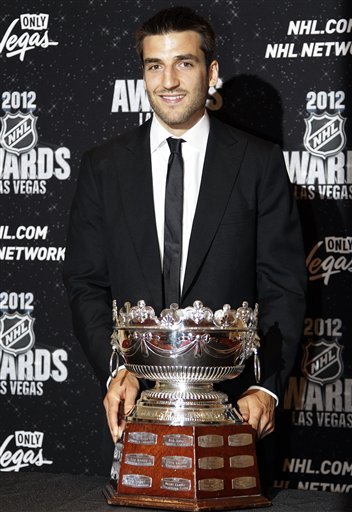 The NHL awards the Frank J. Selke Trophy to the "forward who demonstrates the most skill in the defensive component of the game." It's an unsung trophy for the unsung hero. It's given to guys who can kill penalties, who don't make mistakes with the puck, who disrupt the neutral zone, who do the "little things."

As Jack Edwards reminded you a million times this season, Bergeron is one of the best two-way players in the game. He was a +36 this season which led the NHL. He led Bruins forwards in shorthanded time on ice per game.

He's a team player. He's glue. He brings it all together. And up until last night, his big awards have been won by the teams he's been on. He has an Olympic gold medal and his name on the Stanley Cup. But now he has something that he's won as an individual: an award for how good of a team player he is.

Bergeron is only the second Bruin to win the Selke Trophy. Steve Kasper won it in 1982.

Centers have won the last 8 Selke Trophies. Twenty-five of the 34 recipients have been centers.

It's hard to believe that Bergeron will turn 27 in a month. He's been around forever. And his story is one of the few feel-good concussion recovery stories the NHL has seen recently.

And Erik Karlsson won the Norris for best defenseman.  A post detailing my outrage at that decision is soon to come. 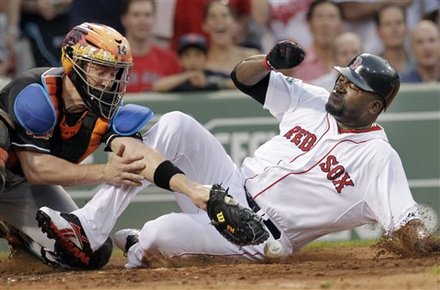 The Sox scored 12 times in the first 4 innings, pummeling Ricky Nolasco (his name makes me think of Oreos) and the Marlins.

David Ortiz only had 1 hit, but it was a big one: a Grand Slam in the 4th that busted open a 7-4 game, turning it into an 11-4 blowout. It was his 10th Grand Slam in a Sox uniform, which is 2nd in team history. Ted Williams has the most with 17. Ted Williams was pretty good.

Ortiz is the only star on this team that seems like a different player than he was last year. He's in much better shape, and he's trying to be a leader. Last year he was chubby and passive. He's only 11 HR and 53 RBI away from matching his totals of last season.

There's no way to scientifically measure how well he's doing as a clubhouse leader, but as a leader on the field, the evidence is clear and overwhelming. He leads the Sox in Average, OBP, Hits, Homeruns, RBI, Runs, Total Bases, Walks, SLG, and OPS. That's leadership.

Mike Aviles hit a 3 run homer, Will Middlebrooks hit a 2 run shot, and Jarrod Saltalamacchia hit a solo blast. He now has 13, which is 2nd most on the team, and 8 more than Adrian Gonzalez.

Felix Doubront cruised to his 8th victory of the season behind the offensive onslaught. He allowed 4 runs in 6 innings. It wasn't his best start, but it was good enough.

He and Buchholz are tied with the team lead at 8 wins. While Buchholz has been the beneficiary of good fortune and ample run support, Doubront has truly earned his 8-3 record. By the way, 8 is the amount of wins that Lester and Beckett have combined.

The Sox go for the sweep tonight as Daisuke Matsuzaka faces Carlos Zambrano. The Venezuelan giant has failed to make it out of the 3rd inning in his last 2 starts. Walks have been a major issue for him so if the Sox can be patient, get on base, then get those RISP hits, they should continue to score runs in bunches.