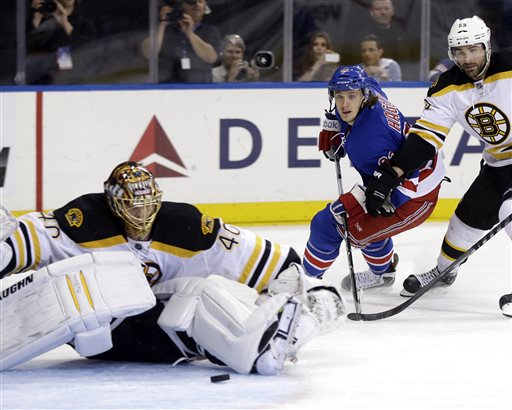 I am not a Tuukka Rask fan. I do give him credit for a very good season, and in Game 3 he made some huge saves late in the game, and I even called him the Bruins' "Ace." But I'm not a Tuukka fan. I hated the Tuukka Time crap in 2010, I hated how poorly he played in that year's collapse to the Flyers. I want him to succeed and I'll give him the appropriate credit he deserves, but I don't like him, and I don't like his face. And last night he cost the Bruins a game.

The first goal he allowed was simply tragic. And it gave the Rangers so much momentum. Thankfully that momentum was sapped when the Rangers went on a Power Play. If Rask allows another softy, let's say against Pittsburgh, the Penguins will smell blood in the water and attack. And it will hurt.

The second goal Rask allowed was a combination of poor puck play and passivity. Maybe some fear, as well. He couldn't stop a puck behind the net, which is fine. He's never been a very good puck handler, and that's not a big deal. Then he takes his sweet ass time getting back into position. He showed no hustle to get back into the net, even though the puck would be on the opposite side. Maybe he was afraid to fall down on his bottom again. Zdeno Chara was also a little too casual on the play. Derek Stepan was playing at full speed, and he capitalized.

He wasn't the only one that deserves to be raked over the coals.

Brad Marchand was also a disappointment. He turned the puck over a few times, he lost a few battles on the boards that he would normally win, and when racing to touch an icing he held up, apparently concerned about an impending hit. That's not his game. He didn't play with any balls last night. He played safe. That's not him.

I'm not worried about this series. Not yet. If for no other reason than I don't take Tortorella's Rangers seriously. I'll be worried if the Bruins lose Game 5. I am concerned about Rask. You can't have games like that against the Penguins, or the Red Wings, or the Blackhawks, or the Kings, or the Sharks. Those teams will either take advantage of the momentum and score, or they're so tight defensively that 1 bad goal could be the difference between winning and losing.

The most important question the Bruins had coming into this postseason was what kind of playoff goalie Rask would be. We've seen great saves. We've seen bad goals. We've seen him cost his team a game. So far, I'm not impressed.

Game 5 Saturday in Boston. The Rangers have a pulse, let's not give them anymore CPR. Kill them now.