Isn't It Fun to Say "Preakness?" 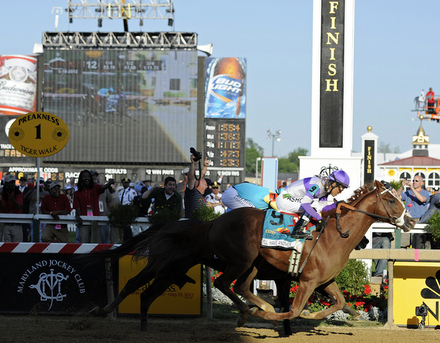 Some horse won the Preakness this weekend. It was the same horse that won the Kentucky Derby. I'll Have Another. Which means he has a chance to win the Triple Crown, the most prestigious achievement in the sketchiest sport. Deadspin.com's headline sums it up perfectly. I'll Have Another Wins Preakness, Forcing All of Us to Watch the Belmont Stakes.

It's true. You have to watch. Because if this horse runs faster than the other horses, he'll be the first horse to do so in these three races since another horse did it in 1978. And that makes it special.

I don't like horse racing. Jockeys freak me out and horses don't have souls. More than that, there's a wide range of sketchiness on display at these events. Not only do degenerate gamblers wager their kid's college funds on these animals, but the well-to-do rich people that breed and own them are even sketchier.

And those ridiculous hats worn by rich women in attendance are obscene. Is there any more grotesque example of excess than someone spending thousands on a hat that they'll wear for one day then never wear again? And once that day is over and those hats come off, those women just go out and get gangbanged by Arab sheikhs who don't believe in deodorant and own the horse that finished 5th.

Then there's the media that cover the events. It's always a weird set of the most abnormal people in the NBC Sports stable (excuse the horse pun). The outcasts. The peripheral guys. Bob Neumeier. And they all adore the "sport." They drone on and on, comparing horses from the 1920s to horses from today, arguing about Seattle Slew vs. Secretariat, and glorifying an event that is held for millionaires to stave off boredom and for gamblers to enjoy the thrill of risking their family's future on a horse ridden by a small man in tight polka-dotted pants.

Horse racing itself isn't that bad. It's not for me. But it's over too quick to be boring, too basic to be tedious, too obscure to be annoying. And not enough people use furlongs as a measurement these days, so I respect that.

I hope I'll Have Another does win at Belmont, then tests positive for steroids. Or they do a DNA test and find out he's 1/8 cheetah. 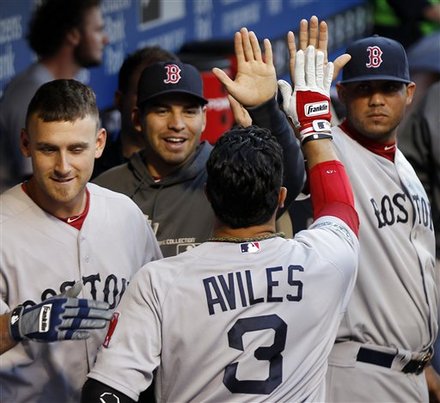 Last year when the Sox played in Philadelphia, it might have been a more revealing series than we thought back then, or that seems apparent from the way the season progressed. The Sox lost 2 of 3 in Philly last year, after just having lost 2 of 3 in Pittsburgh. Then they whined. They complained about how much of a disadvantage playing in an NL park was, how much it hurt to lose the DH, et cetera.

It was a whiny sense of entitlement that was eventually forgotten because the Sox went on a 37-18 (.673) stretch of baseball after leaving Philadelphia. Then September started. Then the losing. Then the excuses again. Then September ended, and so did the season. Then came more excuses. Adrian Gonzalez blamed God. David Ortiz blamed the official scorer. The fans blamed Popeye's Chicken. The organization blamed Francona.

So maybe this time, the Red Sox' trip to Philadelphia would show some more desirable character traits. David Ortiz held a players only meeting a few weeks ago, after Josh Beckett was lit up by Cleveland. The Sox are 8-2 since that meeting. They went down to Philly and beat a hot Phillies team, fair and square. Maybe we are seeing a new kind of character from this team.

Beckett's last two outings have been impressive. 7.2 innings yesterday, allowing 1 run, walking 2, scattering 7 hits, striking out 5. He was brilliant for the first 7 innings, then tailed off in the 8th. He's allowed 1 run in his last 14.2 innings.

Mike Aviles has been a very pleasant surprise in 2012. I think it's safe to say that the organization was right about him and Bobby Valentine was wrong. He's hitting .275, he hit his 6th homerun Friday night, his 7th on Saturday, and his 8th yesterday. He's 3rd on the Sox with 27 RBI. This is very good offensive production from short-stop.

David Ortiz wasn't a liability in the field. He fielded his position quite respectably yesterday.

I honestly don't know how much the Red Sox' character has changed from last year to this. Winning tends to hide character flaws, losing tends to over-expose them. For instance, if the Sox were winning games and Beckett were pitching well, his golfing trip wouldn't have been that big of a deal.

There are still some things that irk me about this team. In the 8th, Jimmy Rollins advanced from 1st to 2nd on a "throwing error" charged to Daniel Nava on a sac-fly. The throw should have been cut off before it reached home, as Pete Orr (no relation to Bobby, although he is from Ontario and wears the #4, which I respect tremendously) was clearly going to be safe. Beckett could have cut the throw off, holding Rollins at first. Or Beckett could have been backing up the plate. He did neither. He just stood a few feet in front of the plate. And it might have turned into a big play.

What bugs me is that win or lose, this team seems to think that they're good enough that they don't have to get the little things right. They're overly confident. Cocky. When they lose, it's because of something external, like not having a DH. And in their minds, they don't have to play their asses off to win. They're entitled to win.

They have been winning lately. But take it with a grain of salt, Sox fans. The Sox have turned a corner. They've done it before. The problem is, once you turn that corner, you have to stay straight. It's like quitting smoking. It's commendable, but if you don't remain quit, then it's not that impressive. 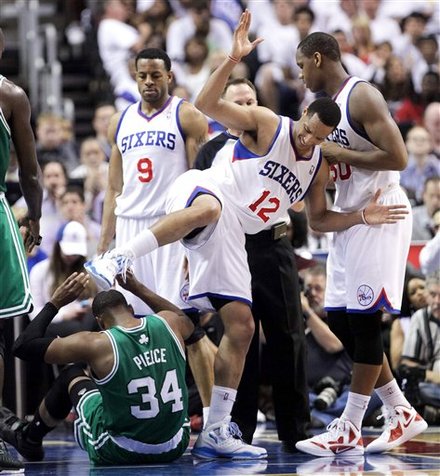 When the Celtics pulled out to a 14-0 lead, I think we were all thinking the same thing: This is over. Both the game, and the series. The 76ers had been demoralized and beaten into submission. It was only a matter of playing out the remainder of the series.

Maybe the Celtics felt the same thing, because they gradually let their intensity peter out. The 76ers turned things around in the 3rd quarter. The Celtics didn't hit a field goal for the first 7 minutes. Philadelphia went on a 13-2 run and were suddenly within striking distance entering the 4th quarter.

But still, these are the Celtics. The veteran team. The ones with Championship experience. They'd prevail in a close 4th quarter. Right?

All the Celtics should want to forget what they did in the 4th quarter. Intercepted passes (4 of them), KG's travelling, missed shots, bad decisions on shots. They allowed the 76ers to get 6 offensive rebounds in the 4th. That's more than the Celtics had the entire game (5).

I'm tired of watching Ray Allen flying in the air, his flight path perpendicular to the shot, trying to make desperate jumpers with plenty of time on the shot-clock. He did that in Game 2, and he had an ugly looking 26 foot attempt in Game 4. He's trying to be Derek Jeter or something, throwing off-balance in mid-air, across his body.

The Celtics seem too committed to getting Allen the ball in certain situations. And I don't like that. If the shot isn't there, it isn't there. There needs to be a Plan B.

Ray Allen might be the least criticized athlete in Boston. He's quiet. He just does his job. And since he's "a shooter," it's understood that he'll go through cold streaks. He was cold Friday night. 2 for 6 from the field, 1 for 4 with his three-pointers, and the Celtics were an abysmal -24 when he was on the floor.

The bench as a whole didn't contribute much. With Garnett missing his shots, they could have used a strong bench performance. That's more on KG's shoulders than the bench's, though.

I think we can give Philadelphia some serious credit for a pair of good 4th quarter performances. And even more credit for coming back from a 17 point 3rd quarter deficit. They've certainly got more character than Atlanta. And the Celtics can't afford to ease off the throttle and relax anymore.

The 76ers have an aggressive instinct about them. And they'll attack any sign of weakness. They have alligator blood.