It's hard not be excited right now. Granted, it's October. The important months of the season are an entire winter, plus big chunks of fall and spring, away. But the Bruins have a stellar goalie in net, forwards who can score, defensemen who can defend, guys who can fight, guys who can pass, guys who can hit, guys who can check. This is the best I've seen the Bruins play since they swept the Canadiens in '09.

And there's the chance to improve. Tyler Seguin is already seeing the ice, and feeling the play like a 3 year veteran. Savard and Sturm are on the mend. Nine players on the roster are under 25.

But there's also room to improve. Tim Thomas had a simply stupendous night last night. But even before the silly goal he allowed, I intended to mention that he seemed a bit too confident and aggressive. I don't mind when he ventures a few feet out of the crease. But when the distance between him and the net is expressed in yards, not feet, I get a little concerned.

Then there was the puck handling. Not only was he struggling with it all night, his decisions to handle the puck at all were flat out stupid.

The goal Thomas allowed was a rarity. Almost never is a goal 100% the goalie's fault. This one was. Ference had 3 or 4 strides on Chimera. Even if Chimera was going to catch up, Ference was in perfect position to prevent any shot on net.

Thomas has every right to be thrilled at being back to Vezina form. But he needs to temper that excitement, and just do his job. Which he did pretty well last night.

Speaking of mistakes, Blake Wheeler made them almost every time he was on the ice. Awful shots, bad passes, turnovers, defensive miscues, general confusion. He's useless. At least Ryder's remembered how to be a goal scorer.

But I don't know how much longer Wheeler should be allowed to dress. When Sturm comes back, I'd rather have an energy guy like Caron on the ice. I guess you could take Marchand off, but who leaves when Savard returns?

The Bruins had severe difficulty moving the puck out of their own zone. In the 1st period, Thomas had to save the game multiple times because of this. Then with a 2-0 lead, Washington pressed, and it all happened again. This has been a glaring flaw for the Bruins for years, exposed most memorably by Carolina in 2009.

Defensemen don't have to score goals to contribute to the offense. They just have to move the puck forward. That also helps a great deal on defense. For years, B's fans have clamored for "a puck moving defenseman." Well, the team needs about four of those, not just one.

But back to positives:

Bergeron had a classic Bergeron game, and got 2 assists to show for it.

Jordan Caron is fighting for that ice time, and he's winning the fight.

Chara and the defense put the hurt on Ovechkin, especially Seidenberg. 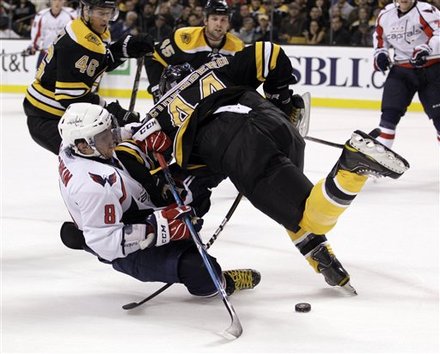 Horton has a point in all 5 games so far.

Lucic was effective on the boards, and in front of the net. I like seeing him on the PP unit, causing mayhem in the crease.

Rechhi as the point man for the PP unit seemed to work pretty well. We'll see what happens when opposing penalty killers challenge him at the blue-line. Nevertheless, the power-play looked vastly improved.

Seguin is the total package. He can shoot, he can do the smart things defensively, and the kid can pass anywhere, anytime. If he ever gets paired with another player who can score like him, the flying circus shall commence.

Shawn Thornton's line was physical, they altered the flow of the game, and they left an impression.

I'm pretty excited. In case you can't tell by the length of this post recapping the 5th game of the regular season.