HOW LONG CAN THE SOX STICK WITH LACKEY? 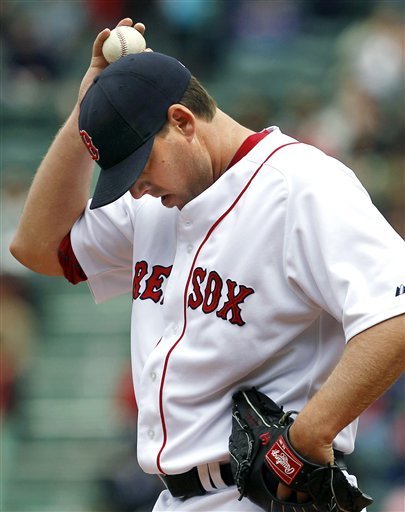 At least last year, Lackey ate innings. He was a disappointment, and had some bad starts, but he had some semi-decent ones, as well. In 2010, we expected him to be a #3 guy, maybe even #2 calibre. In 2011, we figured he'd at least be a serviceable #5, and hopefully a #4. Right now, however, he doesn't even look like a Major League starter.

He had some good starts against AL West teams, but even they got to him yesterday afternoon. 10 hits and 3 walks in 4 innings. He wasn't fooling anyone. He never fools anyone (except Theo Epstein). 2007 was his best year, and he's declined ever since then. And I'm starting to think that he's washed up.

Anyway, the Sox just can't breach that .500 barrier. It's about to get scary. In order to reach the 100 wins Sox fans thought they were predestined to attain, they'd have to play .656 baseball. Which isn't ludicrous. So it's not time to abandon ship. The Sox have 131 games left to eat into that 4 game lead the Yankees hold.

At least Crawford is looking like a Major League hitter. Gonzalez got that elusive 2nd homerun. Ortiz is hitting. They just need more people to show up and work. And they need to start looking at replacements for Lackey.

Sox host the Twins tonight. Wakefield's listed as the starter, opposing Scott Baker. The Twinkies are 11-18, have scored the fewest runs in baseball, and allowed the 3rd most. This should be a good weekend to collect some wins.