This is why soccer fans love this sport. Sure, there's no scoring for 90+ minutes, but that's the excitement. There's tension, anxiety, like the last 30 seconds of a basketball game, only it lasts for 90 minutes.

Tim Howard started it with a top notch save, then an instant release, a quick counterattack against a worn Algerian midfield, and thoroughly abused defense, then Donovan nailed it home. In a matter of seconds, USA went from an early flight home to winners of Group C.

This was the first time the US has won their Group since 1930. And they'll face the 2nd place team from Group D.

We started to officially cut down the field yesterday. And although there was some drama, Day 13 ended up as planned. Uruguay wins their first Group since 1954. And it will be their first trip to the Round of 16 since 1990. Mexico, meanwhile, advances for the 5th straight World Cup. However, they are 0-4 in their elimination matches during that stretch.

South Africa 2, France 1
South Africa became the first host nation to fail to get out of the group stage. That shouldn't be too much of a shock, they were ranked 83rd. But at least the went out with a bang. The French, on the other hand, were ranked 9th. But they haven't won a major game since Zidane left the team. They're not that talented anymore, they don't cooperate, and they don't try. I haven't seen Frenchmen lay down like this since 1940.

South Korea advances for the first time away from their home soil. Nigeria could have advanced with a win, but their weaknesses really showed in this game. 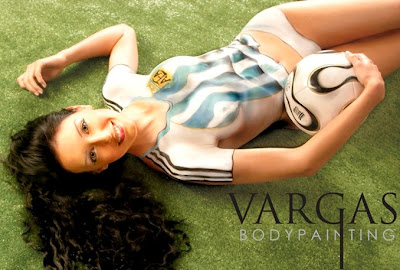 Maradona benched 7 starters, and that's why they only scored twice. That and a good Greek goalie. Argentina won Group B going away.

So we know two of the matchups in the Round of 16. Argentina will play Mexico (a rematch from the '06 World Cup). And Uruguay will face South Korea.
Posted by rob at 11:00 AM No comments: