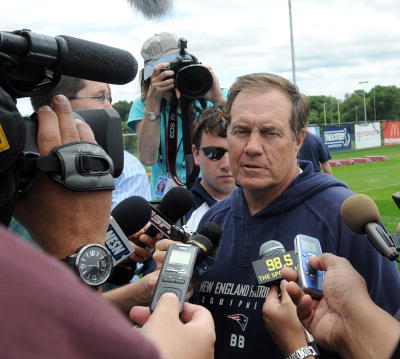 The difference between 4 Yawkey Way and 1 Patriot Place go beyond the differences between a clustered city street and an expansive suburban roadway. Fenway Park spews and leaks information like the Titanic leaked water, while Gillette Stadium is as air-tight with info as an astronaut's helmet.

Brian Waters is the latest example. For weeks, speculative theorists like The Sportshub's Michael Felger have been berating the Patriots for being cheap with Brian Waters. They had no facts to base their criticism. These weren't sharks that detected blood, Felger was more like a blind/dead/senseless vulture bumbling around for a provocative story, making up things until something he said wound up being true.

But it wasn't. The Patriots offered Brian Waters $4 million to play this year, almost triple his $1.4 million salary. But Waters wants to stay at home in Texas. And that's his right, and his choice. Waters might want to play for the Houston Texans, but the Patriots understandably would rather not help one of their AFC rivals improve.

Felger didn't get why the Pats would "nickel and dime" a Pro Bowl lineman when Brady's protection seemed so suspect in the preseason. Instead of acknowledging that he didn't know anything, Felger assumed. And people who assume make asses out of themselves. Felger was wrong. He didn't understand the Pats nickel and diming Waters because they didn't.

Anyway, as unnerving and frustrating as it can be, I like how valuable the Patriots regard information. They don't talk about anything. Even when they talk, they say nothing.

They don't mind being perceived as cheap. They don't care about perception. They don't mind jagoffs like Felger flapping their jaws and spouting rubbish. Unlike the Red Sox who desperately try to control the narratives that sports media discuss.

I remember when the Pats traded Randy Moss they actually went out of their way to debunk stories that had come out about Moss's problems with the team. The Patriots defended a popular star player they dumped. That's something the Red Sox would never do.

It seems funny to me how much criticism the Patriots get in this town, even though they're the most successful Boston sports team in this century. It's because the media doesn't get juicy gossip, doesn't get the inside scoop, they get frustrated and make things up. See: Felger, Ron Borges, John Tomase, et cetera.

Let's Start Our Own Hockey League

The NHL has cancelled preseason games in September, and it won't be long until regular season games are erased from the schedule.

But what's to stop another league in the US and Canada from starting? And if that happened, what would we want that League to look like?

Well Florida wouldn't have any teams. If I had to pick cities that had franchises, it would be the following:

That's it, 21 teams. Divide them into 3 divisions of 7 teams, or don't divide them at all. Whatever. But the root problem with this NHL labor dispute is that small-market teams can't keep pace with large ones. The players want revenue sharing to remedy this problem, the owners want players to get less money. My solution is: eradicate the small-market teams in cities where hockey is seen as a weird side-attraction.

But finding billionaire hockey fans in so many cities might be tough, so let's keep the league at 16 teams, in these cities:

Fewer teams, higher talent level, more familiarity between teams, and no Phoenix Coyotes or Florida Panthers dragging the League down.

How hard can it be? Just adopt the NHL's rules, hire the officials, hire the players. Many of the rinks are owned by cities and states, not the NHL teams that play there. Boston might be a problem, for instance, because Jeremy Jacobs owns The Garden. But offer him high enough rent rates and he'll succumb to his greedier instincts.

To be honest, the players are the attraction. All us hockey fans love the NHL because the best players play in the NHL. We don't care about franchise rights, or anything like that.

So let us start our own League. We'll call it the North American Hockey League, and we'll plunder the Hockey Hall of Fame in Toronto and commandeer the Stanley Cup.
Posted by rob at 11:00 AM No comments: 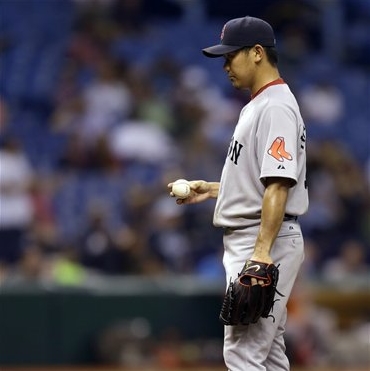 For the first time since 1997, the Red Sox will finish below .500. 1997 doesn't seem like very long ago, but remember that was the year Pedro Martinez won the Cy Young, for the Expos. The Orioles won the AL East. Nomar Garciaparra won Rookie of the Year. Derek Jeter had 385 career hits. Tom Gordon was a starting pitcher. The Marlins won the World Series.

That's how long it's been since the Red Sox lost more games than they won.

Back then, Dan Duqeutte made a trade for an Ace (Pedro), and the Sox became contenders in 1998 and 1999. The Sox could use another transaction like that.

Daisuke Matsuzaka laid another egg last night. The good news was he only walked 1. The bad news was he allowed 9 hits in 3 innings. Alfredo Aceves looked just as bad, Daniel Bard looked even worse.

I sincerely hope the Sox don't keep Matsuzaka. He's slow, and he isn't very good. If the rest of the rotation had more certainty, I wouldn't mind him as a #5 starter. But with the top of the rotation in flux, Daisuke is too much of an unknown variable.