Is David Ortiz a Hall of Famer? 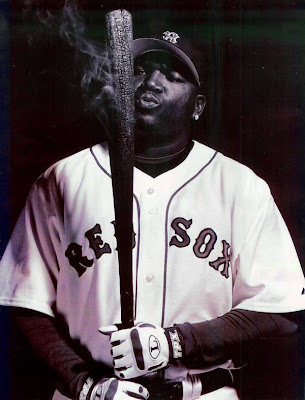 Sorry, Boston, but the beloved Big Papi should not be enshrined in Cooperstown. And there are three reasons why.

Reason #1:
He's a Designated Hitter. Of the 1,823 games of baseball he's played, he's only played 257 in the field. There are no current Hall of Famers who were primarily DHs. Edgar Martinez might be inducted one day. But he played more twice as many games in the field as Ortiz has (592). So far, Martinez has only managed to receive 36.5% in Hall of Fame voting. Induction to the Hall requires 75%.

David Ortiz has much more impressive numbers than Edgar Martinez, but he's still a DH. By itself, that's not enough to keep him out of Cooperstown. But it doesn't help his cause. The DH is viewed (perhaps rightly so) as an incomplete, one dimensional player. It's for big fat sluggers who have no other skills but hitting.

Reason #2:
400 Homeruns simply isn't as astonishing anymore. Neither is the 500 HR mark. There's a very good chance that Ortiz will finish his career with more than 500 homeruns. That's not an automatic ticket to the Hall anymore.

Ortiz has played his career in the most slugger-friendly era in the game's history. The ball was wound tightly, ballparks were built smaller, expansion spread pitching talent thinly, scouting videos allowed batters to see pitchers before ever facing them.

Accumulating massive amounts of homeruns is not as impressive as it used to be. And the fact that the DH allows players to extend their careers as slow, unathletic, hulking sluggers doesn't help Ortiz's case, even if he finishes with 550+ homeruns.

And even before the Sluggers' Era, 400 homeruns was not a guarantee to the Hall. Dave Kingman hit 442 in the '70s and '80s. He's not in the Hall. Darrel Evans hit 414 during the same period, and is also not in Cooperstown. Both these guys played a defensive position as well.

Dale Murphy hit 398 homeruns. He also won the MVP twice and 5 Gold Gloves. He's not in the Hall. Joe Carter hit 396. Graig Nettles hit 390. 400 homeruns has never been a key to the Hall, and it's even less of one these days.

Reason #3:
Perhaps the biggest reason Ortiz isn't a Hall of Famer is that he has a PED history. A PEDigree, if you will. He tested positive in 2003, when the MLB anonymously tested players in order to gauge how prevalent PEDs were in the game. In 2009, it was learned that his name was on a secret list of positive tests.

Ortiz blamed an ignorance of over-the-counter supplements for the positive test. He did so after he had time to consult with the MLBPA and confirm that what he tested positive for was never going to be known.

The Big Papi loving Boston sports media refused to dig any deeper or ask any hard questions. We all forgave Ortiz and he never apologized or satisfactorily explained what he took, when he took it, and why.

Statistically, his numbers suggest a major mid-career improvement, particularly in the power department.

PEDs can't make a regular person into a great ballplayer. But they can turn a solid hitter into an All-Star. They can turn doubles into homeruns.

58 of his 400 homeruns came before he arrived in Boston, and before his positive test. 342 came after that test.

How much did PEDs impact those numbers? There's no way to know. He never revealed what he took, or how long he took it. He claims he doesn't know. So how can we know?

All we can really know is what we see on the field. I see a DH who has reached a milestone that isn't very amazing anymore and who has a positive PED test in his history that correlates with his improvement as a player. Because of that, I don't see a Hall of Famer.