WHAT IS ROY HALLADAY WORTH? 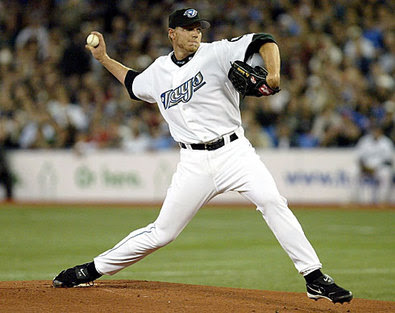 The 2003 Cy Young winner and 2008 Cy Young runner up is on the trading block. The Blue Jays want to get some young talent while simultaneously reducing their payroll. And I can't really blame them. Presently constituted, they're not going to compete with the likes of the Sox, Yankees, and Rays. They don't have the resources to build a team around Halladay, so it makes sense to trade him.

Halladay is under contract until the end of the 2010 season, but at a relatively manageable $15.75 million. However, the Jays are not allowing teams to negotiate with him before trading for him, so trading for Halladay might amount to shipping a basket of prospects North for a mere 14 month lease on Halladay.

How good is Roy Halladay? For my money, he might be the best pitcher in baseball. He's efficient, and consistent. He consistently reaches 220 innings, and does so with minimal effort. This season he's averaging 7.23 innings per start, with an average of 103.4 pitches. He doesn't wear himself out with all these innings like CC Sabathia, he simply amasses them by being quick and efficient.

The notion that the Sox don't "need" more pitching is an overly simple way of looking at things. Just look at these two potential 4-man playoff rotations:

The second one is just so much better. And as many options the Sox have at the bottom of their rotation, Roy Halladay immeasurably improves the top. The 1-2-3 combo of Beckett-Halladay-Lester is absolutely insane.

There's been a lot of comparison between Halladay and Johan Santana. But even though Halladay is older than Santana, he's also better, and has a much better track record of consistency. Furthermore, we know how Halladay will pitch in the AL East. Since 2006, he's 7-1 against the Yankees with a 2.36 ERA.

Trying to pick and choose which prospects to trade for Halladay is a job for Theo Epstein and JP Ricciardi, not myself. But I would give up a good amount of talent for him. I'd certainly give up Buchholz, who has already demonstrated difficulties adjusting to Major League play. Throwing in Ellsbury might be a bit much, as he's a proven talent. Michael Bowden, however, is expendable.

But it's certainly not a must-do kind of deal, for either the Sox or the Jays. Toronto still has Halladay for more than a season, and the Sox still have plenty of pitchers. The Jays might also be hesitant to trade within their division. Ricciardi might subscribe to the Billy Beane philosophy that you make the best trade you can make, regardless of who you're trading with.

In the end, I think Halladay will be a Toronto Blue Jay at the end of the season. The Blue Jays will start a bidding war, just like the Twinkies did with Santana. But nobody will ever be able to pay enough. The Yankees and Red Sox will try to outbid each other until the price reaches ridiculousness and both drop out of the race. But unlike the Twins, who took a lesser deal from the Mets at that point, the Jays can hang on to Halladay.