Meanwhile, in the NHL Just some token news and lack of good news from the NHL. Rumor has it that if the League and NHLPA can't agree to a CBA by Thursday, the Winter Classic will be cancelled. At the very least, HBO's 24/7, which is a nice little promotional tool for the NHL, won't be made leading up to the Classic.

In suburban Chicago, 12,000 fans gathered to watch a team comprised of Blackhawk players compete against a team of NHLers from other teams, including Jordan Staal and Bobby Ryan. Patrick Kane scored 5 goals for the Blackhawks team, but they lost 16-15 in a shootout. Proceeds from the game went to charity.

A group of Montreal Canadiens are fighting the lockout in a Quebec court. I don't know much about the case, or the Canadian legal system, nor do I care to learn. It's just a shame that we're seeing the abbreviation "vs." used in a court-room setting and not to describe an actual game.

And Tim Thomas sits in Colorado and smiles at all of this. The Chicago White Sox didn't pick up the option on Kevin Youkilis, and I think this might be an opportunity for the Red Sox to pick up a talented and versatile corner infielder. If there weren't significant drama in the past.

On paper, signing Youkilis makes sense. The Red Sox, after trading Adrian Gonzalez, are in need of a first-baseman. And Youk is a Gold Glove first-baseman.

But there's some off-paper obstacles to Youkilis returning to Boston. While Bobby "physically or emotionally into the game as he has been in the past" Valentine is out of the organization, the GM who sent Youkilis to Chicago for Brent Lillibridge and Zach Stewart is still the GM. The owners who approved the deal still own the team. This organization shipped Youkilis to Chicago and not much has changed in said organization's structure.

The Red Sox could use Youkilis as a first-baseman, and a solid #6 hitter, but there might be too much water under the proverbial between Youkilis and the Red Sox for this to actually happen.

It's too bad. Because first-base is a glaring hole in the Red Sox roster going into 2013. A decent one is available on the open market, but he might be unattainable for the Red Sox.

Kevin Youkilis was one of the few likable players on this team, almost like a Kevin Garnett. I miss him.
Posted by rob at 12:00 PM No comments:

Disney Buys Star Wars, Episode 7 to Be Released in 2015 It's one of those stories that I didn't believe when I first heard it. Disney bought Lucasfilm for over $4 billion and they're going to make Star Wars sequels. And the best part is George Lucas won't write or direct them.

Nothing against the man who fathered the franchise, but the prequels were weighed down with over-complicated plot points, and the screen was too busy with CGI animations. CGI is great for space battles, but CGI rooms? CGI characters?

As films, the prequels kind of sucked. If Episode 1 had truly been the first film released in the series, it would have flopped, and Star Wars would be a cult bad movie, shredded to pieces on Mystery Science Theater 3000, and enjoyed by people who like bad sci-fi movies like Plan 9 from Outer Space.

Then in Episodes 2 and 3, Hayden Christensen turned Darth Vader, one of the best, coolest, and most complex villains of all-time, into a whiny, creepy, selfish, spoiled, angst-ridden male version of Taylor Swift. Christensen turned the Dark Side into the Melodramatic Side.

In some respects, Episode 7 won't be compared to the originals, but to the prequels. And that's good for Disney. Also with Episode 7, there's more freedom with the story. The prequels had to end a certain way, the sequels don't.

Hollywood ran out of new ideas in 1998, so adding on to an already successful franchise is to be expected. It's also sad in a way. Soon there will be more Star Wars movies than Jason movies. What was once an epic trio of cinematic magic has been distilled and watered down into a massive load of products.

And this time there will be no Natalie Portman to distract me from the awful acting, the annoying characters and the incessant CGI.

Although, how about Emma Watson as Princess Leia's daughter? I think it would be a good casting decision because Ms. Watson is a fine actress. Unfortunately I think the nerds of the world would all die of heart-attacks if Harry Potter connected with Star Wars in such a significant way. And I think J.J. Abrams would be the best choice to direct. He didn't just resurrect the Star Trek series, he reinvented and redefined it. He built a new foundation for an already existing product. Seems like this project requires similar vision and ingenuity.

The Celtics Compared to the Red Sox 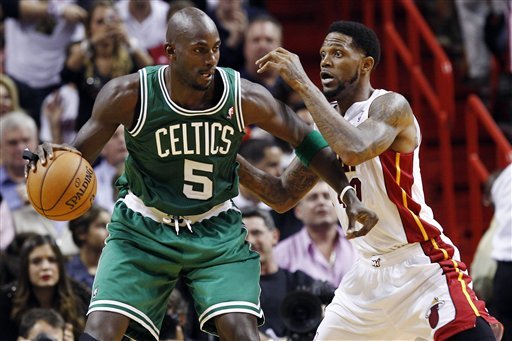 The Celtics lost the opening game of the season 120 to 107, and that stinks. There's nothing much to like about the Miami Heat. Ray Allen was shooting well, and the Heat took advantage of that. Enjoy it when he misses free throws and big three-pointers, Miami.

Anyway, I'm not the biggest NBA fan in the world, or in Massachusetts, or in Norfolk County, or in my town, or even on my street. NBA basketball is slow. There are too many timeouts. The players mill about and chat when fouls are called. Twenty second timeouts last for 40 seconds. And the players dive. And scream during layups like they've been shot.

However, the Boston Celtics are quite likable as a team and as individuals. Let's just compare them to the Red Sox, perhaps the least likable team this town has had since the Red Sox refused to have black players.

Let's compare the two veteran leaders of the C's to the leaders of the Sox. Paul Pierce and Kevin Garnett both despise losing. Not winning is a disgusting concept to them. Compare that to David Ortiz who is more concerned about his contract. Compare that to Dustin Pedroia who used the media to undermine a manager (albeit a crappy manager). Compare that to players who count their days off, use injuries as an excuse, and text owners when they want to complain about something.

Speaking of owners, isn't it nice that you barely hear anything from the Celtics ownership? They've hired their people, and they sit in their luxury box, and watch the game. Compare that to the manipulative Larry Lucchino, who attempts to orchestrate everything from the clubhouse to the media.

Then there's the troublemakers. Rajon Rondo is the controversial player on the Celtics. Because he's not a great perimeter shooter. And he gets emotional, especially when things aren't going well.

Compare Rondo as a problem child to the babies on the Red Sox. Need I say more? Rondo is very well-behaved, and his biggest problem is that he wants to win too much. There's nobody on the Sox with that issue.

So while I'm not a huge fan of NBA basketball, I'd rather watch these guys in green play their sport, then the fellas at Fenway play theirs. Because the Celtics are likable.