TMZ is reporting that Junior Seau was found dead in his Oceanside, CA home. There are reports that there was a shooting. And some reports have indicated it may have been suicide.

Obviously this is a story that's just breaking, and very little is actually known. Until it is, I really can't say much about what my opinions are. Seau's had some problems since retiring in 2010. This might be the ultimate end of those problems. It also might be something else.

It's still sad. He was 43 and is survived by three children. That's the saddest part.

How Bad Will BC Football Be? 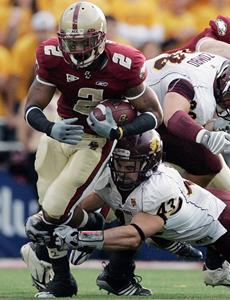 The BC Eagles kicked Montel Harris off the team "due to a repeated violation of team rules." Harris missed most of last year with injury, but rushed for 1,243 yards in 2010 and 1,457 in 2009. He'd already scored 30 touchdowns (27 rushing, 3 receiving) in his collegiate career. He was by far the best offensive player on the team.

BC also lost Luke Kuechly to the NFL. He was by far BC's best defensive player.

The Eagles' recruiting class was disappointing (ranked 11th in the ACC, not even in the top 50 nationally).

This is a 4-8 team that has gotten worse. Looking at their schedule, they'll beat Maine. They might struggle against Army. And maybe a win against Northwestern. I can't see more than 3 wins for this team.

It's unfortunate. In 2007, this team rose as high as #2 in the national rankings. Thanks to Matt Ryan. Even after that, they were still going to bowl games, still winning bowl games. Now bowl eligibility is an optimistic goal.

And what's the long-term plan? Where is this team going? Failed minor league baseball players as QBs? Saving scholarships for walk-ons and recruiting players that aren't even being looked at by anyone else?

This program is on life support.
Posted by rob at 1:30 PM No comments:

When Jonathan Vilma put $10,000 cash on the table and offered it as a reward to any of his teammates who could knock Brett Favre out of the NFC Championship game in early 2010, he had no idea that he would be costing himself $5.5 million. That was the punishment handed down by Roger Goodell today. Vilma has been suspended for the season, without pay.

And I'm all for it. Vilma offered a financial incentive (which is a violation of the salary cap) to injure a player. Anyone who thinks the punishment is too harsh must take into consideration those two points. The Saints were violating the cap. And they were encouraging their players to injure other players. I don't know if you've noticed, but the NFL has been trying to clamp down on injuries, especially to QBs.

Oh, and then the Saints repeatedly lied about it, and continued to do it even while under investigation. Like a burglar continuing to rob a house even after the police show up.

And maybe this took place with other teams. I doubt the Saints were the only team that had such a program. It won't happen anymore, though, after what happened to Sean Payton and now these four players.

Anthony Hargrove was suspended for 8 games. Probably due to his obstructing the investigation and initially lying to the NFL.

Will Smith was suspended for 4 games (and sent to live with his Aunt and Uncle in California). He reportedly helped former defensive coordinator Gregg Williams set up the bounty program.

Scott Fujita, who is now on the Browns, was suspended for 3 games.

What the Saints did was wrong. And even if other teams did it, that's a lame excuse. If you got pulled over by a State Trooper would you say to him "You know, I'm not the only one speeding on 128 right now." Yeah, good luck getting out of that ticket.

No head coach will promote or allow a bounty program after what happened to Payton.

And now, no player will try to set up such a program on their own, or even participate, after what happened to these four guys. The risk has become greater than the reward. Thanks to Roger Goodell.
Posted by rob at 12:30 PM No comments:

Only one game played last night...

A trio of Devils scored their first playoff goals and Travis Zajac scored his 5th of the postseason. The Devils penalty killing finally showed up, killing all 5 Flyer Power Plays. The Flyers failed to make Old Man Brodeur work, only managing 21 shots. This game once again featured late penalties. 28 penalty minutes were issued in the last 16 seconds. That tends to happen in blowouts. The series goes back across the Delaware tied 1-1. 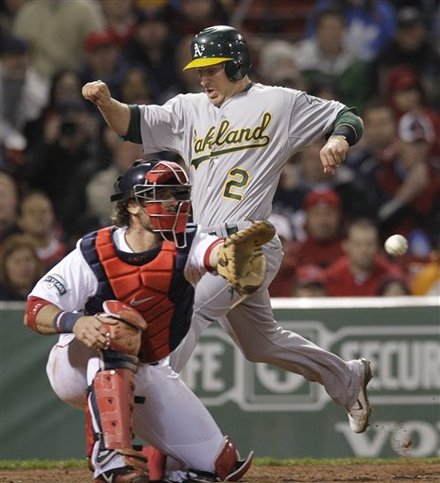 The Sox just can't seem to climb over .500. Jarrod Parker shut them down for 6.2 innings last night. Doubront had a subpar start. And despite a late rally, the Sox could only manage 3 runs. That's the trend with this Sox offense, either score 3 runs or less or 9+ runs. There is no middle ground.

Doubront has been a bit of a success story this season. This is the first time he's failed to go 5 innings. He was coming off back-to-back Quality Starts. He's been a serviceable #5 pitcher. This was his first setback and I'm interested in seeing how he responds to it.

The Athletics are a very poor hitting team. Only one of their starters has an average above .300, five are below .250, and three are below .200. Doubront didn't get lit up. The A's chipped away at him though, single by single. He did strike out 8. Against a better hitting team and on a warmer night, he might have gotten crushed.

We'll see how Doubront does in his next start. Which will be against the Royals on Monday.

Daniel Bard takes the mound for the Sox tonight. He faces Brandon McCarthy, who's pitched decently (4 Quality Starts) despite his 1-3 record. He does give up a lot of hits, though, so maybe the Sox can put up a few crooked numbers.

No Rondo, No Problem 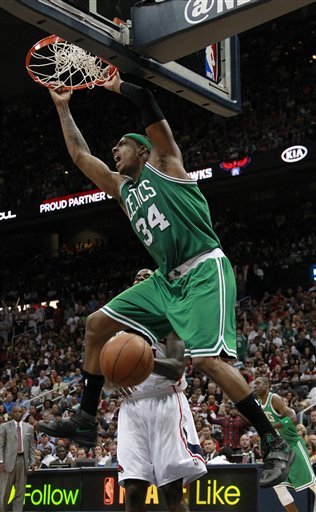 Somebody had to step up in Rajon Rondo's absence. Paul Pierce has built a career on stepping up when it matters the most. 36 points, 13 rebounds. We've seen this kind of night from Pierce before in postseason play. He is, without a doubt in my mind, a member of the prestigious Best Celtics Ever club.

Garnett also showed up. 15 points from him along with 12 rebounds. Bradley added 14. And the bench contributed 14.

Although the Celtics didn't look like the superior team for the first three quarters, they kept themselves in the game. Atlanta pulled out to a lead, but the Hawks haven't been very good at maintaining leads, let alone building on them.

And speaking of pressure, all of it is on the Hawks. Rondo will be back for Game 3, and the Celtics now have home court advantage in this series. The Celtics were 24-9 in the Garden this season. The Hawks were 17-19 on the road.