The NHL needs to implement an escalating punishment scale for these kinds of hits. Sort of like what MLB does with steroids, or the NFL does with their "substance abuse policy." First offense, 2-4 games. Second offense 5-10 games. Third offense 10-20 games. Fourth offense is 20 to 40. Fifth offense is an 80 game suspension. Sixth offense: permanent banishment.

Now this would only be for blatantly intentional head shots like this. It wouldn't get rid of concussions in the NHL, because it's a fast paced, hard hitting game. But it might make the Matt Cookes of the world think twice before charging and elbowing a defenseless player.

And it might make Mario Lemieux think twice when assembling his team.
Posted by rob at 12:00 PM No comments: For the 10th time, the BC Eagles won the Hockey East tournament, grinding out a 5-3 win over Merrimack. Both BC and Merrimack were selected for the NCAA tournament, along with UNH. We'll have a preview of the NCAAs in the next few days.

What Jerry York and Boston College have done in the last decade has been nothing short of extraordinary. They've won 4 of the last 5 Hockey East tournaments. Since 2001, they've won 6 of these tournaments, 5 regular season titles, 5 Beanpots, made 9 NCAA appearances, 6 Frozen Fours, and won 3 national titles.

However, some of BC's weaknesses were thoroughly exposed by Northeastern and Merrimack this past weekend. Goalie John Muse has a stellar record, but he tends to over-commit just a tad. He's got a few small gaps that skilled shooters and lucky bounces can find. BC also struggle against physical teams like Northeastern that are able to keep the puck on the boards, and staple BC's skill players against the glass. BC's forwards aren't soft, but their strengths are in the middle of the ice. They hardly ever grind out physical goals.

Fortunately for BC, most of college hockey has tried to emulate them. It's about speed and skills. Very few teams can play 60 tough physical minutes. Even if they can, they then lack the requisite skill to score 3 or 4 goals to beat BC.

BC starts the NCAA tournament in St. Louis on Friday. They'll play Colorado College at 9.
Posted by rob at 11:00 AM No comments: 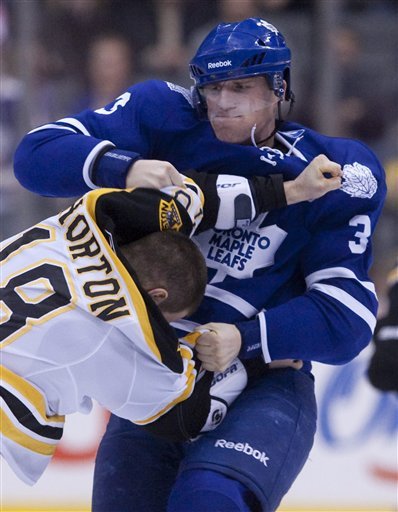 Maybe if Tim Thomas hadn't had one of his worst games in months, and if James Reimer hadn't had the best game of his career, the Bruins could have eked out a win, or an OT loss. But for too long, Thomas has carried this team. And when he dropped them, nobody else picked them up.

Thomas, along with Lucic and Chara, have been the load bearing talent all season. All three had bad games. Thomas was caught out of position. Lucic had a few token shots that wouldn't trouble a high school goalie. And Chara failed twice to make a play on a puck, which led to a Toronto goal.

The rest of the team was doing what they've been doing all year long: being very good at being very mediocre.

Toronto was fighting Saturday night. They're just a few points out of the playoffs. Just like Nashville was fighting on Thursday. The Bruins have no fight in them. They might play a good shift here and there, but they can't string multiple quality shifts in a row. There's no fire. No motivation. No dedication.

Actually, I think the defensemen have probably been making these errors all season. We just didn't notice. Because when Thomas was on his A-Game, those errors didn't become costly errors.

I just don't like many of the forwards on this team. We have a 1st line center who can't score goals. We have an "energy" line that hasn't produced energy since January. We have frequently slumping "scorers," and more role players than there are roles.

The Bruins' offense is like a very complex machine with a million moving parts. When everything's in order, the machine produces. But it just takes one tiny flaw in all those parts for the whole thing to break down. Ryder turns the puck over too much. Lucic is slumping, so the whole 1st line can't score. Marchand and Bergeron are cold, so now the whole team can't score.

Then there's the power play, which hasn't produced a 5 on 4 goal since February 18th, and they're 1 for their last 29.

If the Bruins aren't motivated by seeding, they should at least be motivated by pride. Down 5-1 going into the 3rd, they didn't show any life, or any determination to win the period until just a minute was left on the clock.

This team will not make much noise in the playoffs. I'm fairly certain of it. I'll still watch, I'll still hope. But it's sort of like how I feel about MegaMillions on Tuesday. I've bought a ticket, because you never know. But I haven't put a down payment on a Ferrari yet.

Bruins host the surging Devils on Tuesday. Then the Canadiens on Thursday. Should be an interesting week.