BC Hockey Comes Back Against Merrimack #1 ranked Boston College continued to roll, beating Merrimack 4-3 Friday night. The Eagles fell behind by 3 goals in the 2nd period, but erased that deficit in less than 5 minutes, also in the 2nd period. Then in the 3rd, Steven Whitney's 6th goal of the season gave the Eagles their 8th win, and coach Jerry York's 922nd career victory (the record is 924).

After Merrimack went up 3-0, Whitney started the scoring for BC in the 2nd. So far this season the senior from Reading, Mass. has been BC's secret weapon behind Johnny Gaudreau. Gaudreau assisted both Whitney's scores. Patrick Wey and Danny Linell scored BC's other goals.

The Eagles shot the puck 42 times, and barely missed on a few scoring opportunities in the 1st period. BC didn't figure out Merrimack goalie Sam Marotta until the 2nd.

BC hosts Dartmouth on Saturday in a non-conference game, then it's the annual home-and-home against BU on the 30th and December 1st. Jerry York can tie and break the all-time record for college hockey coaching wins in those rivalry games, which would be quite fitting.

Maryland and Rutgers to Big Ten

When the SEC went to 14 teams, the other BCS conferences watched to see if it would work. It did work, and now the Big Ten is expanding. They're reportedly going to add Maryland, as well as Rutgers, taking them from the ACC and Big East, respectively.

Both teams would add an East Coast presence for the Midwestern conference. And Rutgers would help the Big Ten infiltrate the New York media market. The Big Ten already has a juicy TV contract with ESPN, as well as their own network, so adding teams in general only increases the content they can provide.

I'm getting a little tired of this musical chairs in college sports. I want it over with.

In 10 years or so, it will all be sorted out. There will be three major conferences, with 16 or 18 teams each: The Big Ten, the Pac-16, and the SEC. The ACC and Big East will combine as a 12 team league just below the Big Three.

And in Webster's Dictionary, the Big Ten will pay for the meaning of the word "ten" to be changed to "any number between nine and twenty." "Ten" will become an approximating word like "several."
Posted by rob at 3:30 PM No comments:

Both Kansas State and Oregon lost, catapulting Notre Dame to #1, and bringing Alabama back to the BCS title game as #2 after only a 1 week absence.

When Notre Dame lose to USC, which they will, there will be a BCS mess for the #2 team in the country. Alabama will rightfully assume the #1 spot, then there will be Georgia, Florida, Oregon, Notre Dame, Kansas State, Florida State, Clemson, et cetera.

In other words, it's good that we'll have a playoff next year. But are 4 teams enough? I think 6 or 8 would be best. But progress is progress.
Posted by rob at 11:00 AM No comments: 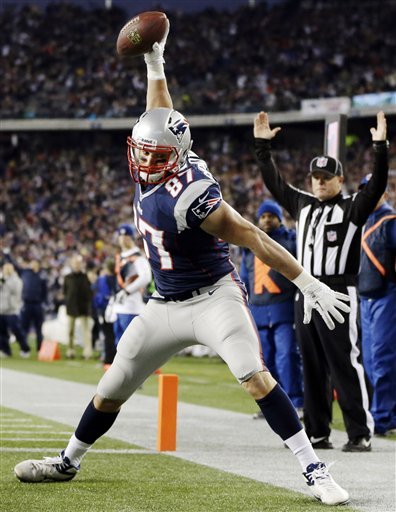 I like Andrew Luck. I liked him at Stanford. And as much as I also liked RG3, I felt like Luck was a better NFL QB because he was a better decision maker. And maybe someday that decision making ability will come to fruition. But not yesterday. Yesterday, Mr. Luck was a walking turnover.

The much-maligned Patriots defense turned this game around in the 2nd quarter. They forced a 3 and out which led to Julian Edelman's punt return TD. Then Vince Wilfork's pressure influenced Andrew Luck to thrown an INT, which Aqib Talib returned for another TD.

In the 3rd quarter, the Patriots offense stepped up. Right after half-time they flawlessly drove downfield and scored. Then after Rob Ninkovich forced an Andrew Luck fumble, Brady hit Rob Gronkowski in the end zone. And the game was essentially over.

Alfonzo Dennard's pick 6 was icing on the cake, and the Patriots won the 4th quarter 21-7. He and Talib are actually legit CBs, and that's nice to have once again.

But already I can hear the armchair coaches out there. "Why was Gronk still in there?" "Why were we still scoring?" "Why do we have star players on PAT?"

Folks, it's a 60 minute game. And injuries are always a risk. You play 60 minutes, even with a big lead, so when you need to play 60 tough minutes you're accustomed to it. Please leave your amateur coaching strategies where they belong, inside your brain, along with your theories about traffic on 128 and how you can do a better job than your boss.

Some people are already complaining about this 5 score victory. This Yahoo recap moaned about the Patriots defense being "suspect" and allowing 448 yards. Um, the defense also scored twice, forced 4 turnovers, that's a good day for a defense. Regardless of how many yards they allowed.

Let us be cheerful. The Pats have a 3 game lead over every AFC East team. They're playing the Jets on Thanksgiving, and it's an opportunity to all but eliminate the NYJ from the divisional race.