Mutiny on the Red Sox 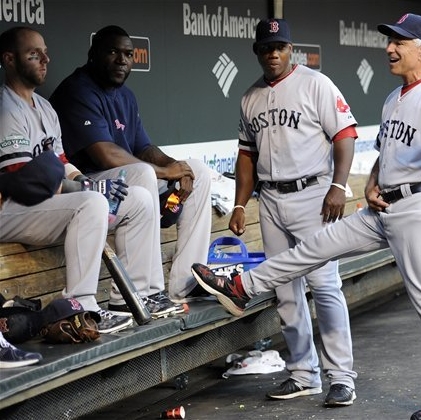 You've probably already read or at least heard a summary of Jeff Passan's article about Red Sox players being upset at Bobby Valentine, complaining to Ownership, and a meeting being held in a New York hotel. Here's the sequence of key events:

July 22nd: Jon Lester is left in a game against the Blue Jays, despite struggling mightily. He allowed 9 runs in the first 2 innings but remained in the game, pitching into the 5th. He allowed 11 runs total.

Adrian Gonzalez, on behalf of himself and others, texted Red Sox Ownership (John Henry and Larry Lucchino). They complained that Valentine embarrassed Lester by leaving him in the game too long.

July 26th: In New York's Palace Hotel (on an off day before a series with the Yankees), the owners call a meeting of players. The players expressed their grievances. Some did not want to play for Bobby Valentine. Others felt that Valentine had become a scapegoat. Some players did not attend the meeting.

Since this meeting, the Red Sox Front Office and Ownership have all publicly declared that they "stand behind" Bobby Valentine. The Red Sox are 8-10 since the meeting.

Lots of people are defending Bobby Valentine, or at least not blaming him for these problems. But he is partially responsible. He's a polarizing guy. He's talkative. He doesn't have a censor. He rubs some people the wrong way. None of this is new. This is who he has always been.

Adding Valentine to the Sox clubhouse was like adding hot sauce to a dish in an effort to make it less spicy. It doesn't make sense. He and his relentless personality only complicates the problem.

The owners have declared their support for Valentine through public statements. It's just words, though. Empty words. If Ownership supported Valentine, they wouldn't give the players an audience for their complaints.

Anyone watch The Office? Remember when Dwight goes to Jan (his boss's boss) in an attempt to oust Michael (his boss). What does Jan do? She tells Michael, and lets Michael handle the discontent. That's what the Sox Owners should have let Valentine do. Instead, the Owners meddled, and didn't let Valentine do his job.

You can't stand behind someone, then step in front of them and interfere in their job. Either let Valentine manage or fire him.

The players on this team should be ashamed of themselves. I was indifferent toward Adrian Gonzalez before today. Now he seems like he's a leader of complaints.

Part of Passan's piece mentioned a cell phone picture circulating among Sox players. Dustin Pedroia is smiling and giving a thumbs up. In the background lies a sleeping Bobby Valentine (or at least a facedown person that is allegedly Bobby Valentine). The caption reads "Our manager contemplating his lineup at 3:30 p.m."

Dustin Pedroia needs to move on and realize that Francona is gone. I know Valentine is a joke, but he's still the manager.

Then again, Pedroia challenged Valentine on Kevin Youkilis at the start of the season. And Valentine backed down. How can you respect Valentine after that?

Bobby V is a bad manager. That's why no MLB team gave him a job since 2002. He tries too hard to do too much. He tries to be a psychologist and keep pitchers in games so they build confidence. He thought he was a physician when he concocted a rehab plan for Crawford that involved playing a maximum 4 games in a row at a time. He thinks he's an inventor, a preacher, a motivational speaker, a philosopher, a dietitian, and a publicist.

At the same time, the Ownership aren't letting Bobby Valentine do his job. The heirchy of power in a baseball organization should be simple:

Manager: decides who on the roster plays and when they play
GM: decides who is on the roster (draft, trades, signings, releases, promotions)
Front Office: authorizes funds for payroll, decides general direction of the team, interacts with other parts of organization (promotions, ticket sales, customer service, et cetera)

With the Red Sox, everything is confused:

Manager: decides who plays
GM: usually decides who is on the roster
Front Office: fields complaints from players, decides how much GM spends (not just how much they're allowed to spend), dictates how manager and GM should act, manipulates the media to give a favorable impression of the team, tells ticket office to lie about number of tickets sold

Larry Lucchino needs to stay in his office. Part of being a boss is delegating. When you delegate responsibility, you can't do it halfway and only give someone partial responsibility. When you appoint a GM, you have to let the GM do his job. Otherwise dysfunction follows.

Then we get to the players. They're whiny, spoiled, disgruntled, and they don't seem to care much about winning.

A baseball team doesn't have to be 25 best buddies. But the prime goal of all 25 players should be the same: win.

Pedroia's prime goal is to get Valentine fired. Gonzalez's is to make sure Jon Lester's feelings aren't hurt. Beckett's is to drink. Lackey's is to drink more than Beckett. Ortiz's is to get a big contract for 2013. Matsuzaka's was to win the World Baseball Classic. Ellsbury's goal is probably to get out of here.

What's the solution:
Limit Lucchino to desk activity. Fire Valentine and hire a low-key, no-nonsense manager who'll do no more than fill out a lineup card and decide when to take pitchers out of a game. Release Beckett. Release Lackey. Don't re-sign Ortiz for anything more than $8 million. Trade at least 1/3 of the remaining babies. Give younger players a chance to make this team.

Everyone is at fault here. Everyone sucks. They need to either be removed, or have their roles significantly adjusted. And if you pay money to see this team play, you're a sap. 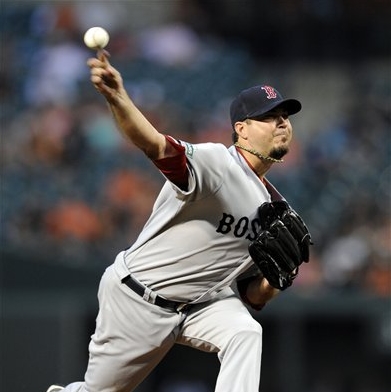 In my opinion, I think it's a better investment for the Red Sox to pay Josh Beckett to not pitch for them than it is for them to pay him to pitch. He just sucks. There's nothing redeemable about him as a pitcher or as a person. This off-season, the Red Sox should try to trade him for nothing, even pay most of his salary. And if there are no takers, just release him and eat the contract.

What is his positive contribution to this team? I can't see any.

With this team, it's gotten to the sad state that you just have to admit "Baltimore is better."

The Red Sox were 1 for 10 with runners in scoring position. Beckett allowed a pair of homeruns. Mike Aviles struck out 3 times and has become a useless part of the lineup. Alex "text message" Gonzalez was 0 for 3 with RISP.

This was a big series. I know Wei-Yin Chen vs. Josh Beckett is a bit of a mismatch in favor of Baltimore, but I'm disappointed the Sox couldn't pull it out last night.

The good news is that the Red Sox' worst pitcher has already pitched in this series, so it can only get better from here. Aaron Cook faces Miguel Gonzalez. Gonzalez is coming off back-to-back starts that were very good, and the Red Sox don't have much history against him. That's usually bad for the Sox.