Alabama might be the 3rd best team in the country, maybe the 2nd best. I like Alabama. But they've had their shot. And they blew it. They missed field goals, ran a foolish trick play and couldn't score a touchdown in the biggest game of their season. Maybe they're better than Stanford, and certainly better than Boise State. But the Tide had a shot and lost. Other teams deserve a shot.

Here's the BCS rankings after this weekend's games:

1. LSU Tigers - Can't argue against this, but there's still one AP voter that selected Boise State as #1. What the fuck? 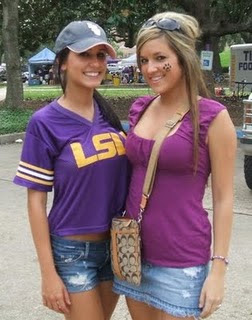 2. Oklahoma State Cowboys - 50.1 points per game, they still have to get through Iowa State, Texas Tech, and #6 Oklahoma.

3. Alabama Crimson Tide - They've beaten #8 Arkansas, #12 Penn State, but they have no offense apart from Richardson.

4. Stanford Cardinal - If they beat #7 Oregon this weekend, how can you argue against them rising to 3rd?

6. Oklahoma Sooners - They can spoil Oklahoma State's title hopes but they lost Ryan Broyles, so that will be tough.

8. Arkansas Razorbacks - They've only lost to the #3 team in the country. If they can beat LSU on 11/25, then the SEC West will have eliminated itself from the National Championship.

9. Clemson Tigers - Can clinch the ACC Atlantic with a win on Saturday.

10. Virginia Tech Hokies - Their only loss came to Clemson. Who says the ACC isn't that good?

It's too bad we won't see that play out. 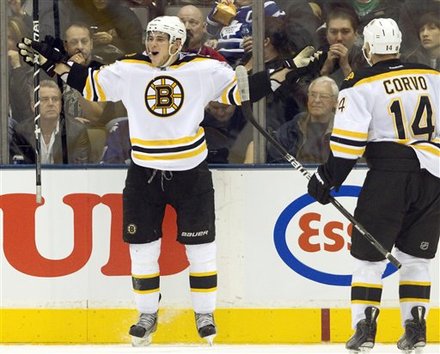 The Bruins match up extremely well with the Maple Leaf's. Toronto's strength is offense, and the Bruins are the best team in the NHL at neutralizing a few key forwards. Just ask Stamkos and the Sedins from last year's playoffs. The B's have Chara, Seidenberg, and of course, Tim Thomas.

The Leafs also have questionable goaltending, and inept defensemen. The Bruins' forwards aren't amazingly talented (except for Seguin) but the Leafs' are so easily exploited that goals are inevitable.

Anyway, to Seguin. His first career hat-trick and he does it 25 miles from his hometown. His first goal was on the Power Play and was a great example of a scorer's ability to hide themselves in dangerous positions. It was also a prime example of Toronto's lousy defending, and the effectiveness of shifting the puck around with a man advantage.

His second goal was sheer skill and coordination.

It also came after he made a good defensive play in the neutral zone. Which is what the Bruins really like to see.

And his third goal, he just flat out beat Komisarek, then Scrivens.

Other Bruins had great nights, of course. Lucic scored twice with an assist. He's red hot. Bergeron assisted all 3 of Seguin's goals, and I think the Bruins have solidified at least one line combo. And David Krejci actually did something, quadrupling his season point total with a goal and 2 assists. He came into this game with just 1 goal and 0 assists.

The Bruins have dominated Toronto twice this season. They match up perfectly against them, able to neutralize the Leafs' strengths and exploit their weaknesses.

They can continue to win tonight (it's so weird to have less than a week between games) as they host the very bad Islanders. They're averaging just over 2 goals per game. But they also don't allow many goals. Still, they have yet to win on the road. 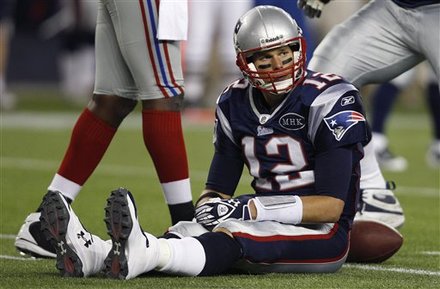 We all turned our clocks back an hour on Saturday night. The Giants turned theirs back 4 years on Sunday evening. The Giants shutdown the Pats offense, then won thanks to a flag route in the end zone. And even though the defense didn't allow a ton of points, they couldn't stop the big drive at the end of the game. They weren't clutch.

As bad as the defense looked on that final drive, where was the offense. I know people hate the fact that the offense seemingly needs 35 points in order to mask the defense's shortcomings. But turning the ball over 4 times isn't exactly helpful. There's no doubt that the Patriots' talent is heavily weighted on the offensive side of the ball, so when that unit foes 5/15 on 3rd downs and turns the ball over 4 times, I think they deserve some criticism.

Both of Brady's interceptions were simply bad passes. He's had a lot of those this year. He was nearly picked again. And again. He then fumbled, which wasn't so much his fault. My point is, the Giants scored 10 points off the second Brady pick, and that fumble.

Then Edelman dropped the ball on a punt return after a 3 and out.

Criticize the defense all you want, and they deserve it. It's not a well constructed unit. But can you honestly tell me that this offense has performed to the level it's capable of?

I don't think it has.

Pats are at the Jets Sunday night and that is a massively important game with the Pats, Jets, and Bills all tied at the top of the AFC East. The Patriots haven't won a big road game in a long time, and they don't get much bigger than this one.