NHL linesmen are underpaid.
Posted by rob at 3:00 PM No comments: 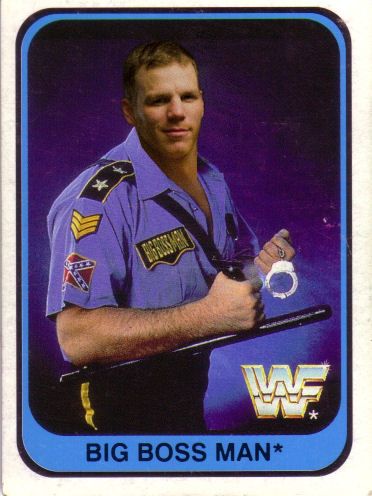 For the last few years the Bruins have actively tried to lock down key players before they reach free agency. It's been a refreshing departure from the old ways of the Bruins' front office. The B's extended Shawn Thornton's contract for 2 years, keeping the enforcer in black and gold until the 2013-14 season. The deal is worth $2.2 million.

$1.1 million a year is a good price for a guy like Thornton. He leads the NHL with 19 fighting majors this season, but he's not just a pugilist. He's a great fighter with his gloves off and a solid player with them on. He plays on a line that energizes the rest of the team, he plays smart yet physical, and he contributes positively in his 9:07 of ice time per game. He even scored 10 goals last year.

The Bruins were 13-5 in the playoffs when Thornton dressed. 3-4 when he didn't. He's known for his fists, but he also has two rings on those fists, and he does more than fight to earn them.

Who starts Opening Day isn't really all that important when you think about it. Rotations get shuffled and reordered throughout the season. And who starts Game #1 in April isn't nearly as important as who starts Playoff Game #1 in October (or Game #163 in October). The only reason it's interesting to me is because the Red Sox don't have a true Ace.

Justin Verlander is starting for Detroit on April 5th. The Tigers didn't need a press release to tell us that. He'll be facing Jon Lester. Lester was last year's Opening Day starter. So Bobby Valentine's first managerial decision in a meaningful game shouldn't be too controversial.

Why Lester over Beckett? I think Lester's more consistent. Beckett also suggested to Valentine back in January that Lester start Opening Day. To be honest I don't think Bobby V deliberated much on the decision. Neither starter is an Ace. Lester is a consistent #2, and Beckett fluctuates between 1, 2, and 3, averaging out to another #2.

I'm really anticipating the start of the season. Much like I anticipate dentist appointments. You're worried that it might be painful. There's a slim hope it won't be. Either way you just want it to happen so you can get it over with.
Posted by rob at 1:00 PM No comments:

The Pats added to their arsenal of offensive weaponry by signing Donte Stallworth to a 1 year deal. Stallworth only caught 22 passes for 209 yards last season and has not been very productive since his one year DUI/manslaughter ban in 2009. Even before that he hasn't been productive since he left the Patriots after the 2007 season.

Give me a second while I spin this discouraging fact into something extremely pro-Patriot...

So maybe having Tom Brady as a quarterback and Josh McDaniels as a coordinator could rejuvenate Stallworth's career. He caught 46 passes in '07 for 697 yards and 3 TDs. That's good considering he was Brady's #3 option. Welker and Moss combined to catch 210 passes for 2,668 yards (1.5 miles) and 31 touchdowns that year. In 2012, Stallworth will again have to compete for receptions with Welker, and now Gronkowski and Hernandez. But he has shown an ability to produce in such a situation.

And he will not struggle with McDaniels' playbook, which he absorbed well in 2007.

Stallworth provides a vertical threat. And along with Lloyd, the Patriots now have a diverse and problematic set of receivers. Last year, Patriots WRs not named Welker caught 74 total passes. 51 of those were Branch's. Even with Welker, WRs caught 196 of 402 team receptions. Less than half (48.8%). That's because Gronk and Hernandez caught 169 total passes. Which is a testament to their abilities, but it also means the Patriots' offense wasn't multidimensional. It was all Welker, Gronkowski, and Hernandez.

Brady will have more options in 2012. We saw in the Super Bowl what can happen when Gronkowski gets taken out of the game. With this stable of receivers, the Pats are hoping to resolve that vulnerability. None of these new receivers are thoroughbreds, but there are enough of them to keep a defense off balance.

And while the Patriots haven't done much to address their Swiss Cheese defense, they've improved their strongest area, and haven't spent much to do it. They've decided to perfect their strength, rather then spending a lot to try to raise their weakness to mediocrity.

It's sort of like a movie studio adding a cheap former star to a guaranteed blockbuster hit instead of spending tens of millions to put big stars in a crappy movie that will likely be a box office bomb.

I think it's a sound strategy. And in other breaking news, I once again agree with what Bill Belichick does.
Posted by rob at 12:00 PM No comments:

Peyton Manning Taking His Talents to the Rocky Mountains The Broncos acquiring Peyton Manning makes an absurd amount of sense for both parties. John Elway and the Broncos front office know that Tebow was actually one of their team's biggest weaknesses. They've always harbored doubts, even in the midst of Tebowmania. Manning gives the Broncos a legit QB, and nobody can argue that this isn't an improvement over Tebow. So the public outcry won't be overwhelming. And for Peyton, he stays in the AFC, and is on a playoff team. A team that actually won in the playoffs.

Not even the Archbishop of the Church of Tebow can argue that this isn't an improvement for the Broncos. Tebow, for as many games as he won for the Broncos, was also a prime culprit in their losses. He couldn't consistently drive the ball down the field and score. He couldn't even consistently get 1st downs. When the defense was able to give him a chance late in games, Tebow could win. But that winning was dependent on the defense. He could finish a victory started by his teammates. He wasn't, however, good enough to initiate victory.

Peyton is. At least he has been in the past. For every Tebowist who spouts "All Tebow does is win," Mr. Manning has about 140 more wins than Mr. Tebow. Manning has won games for team's with horrible defenses. He can survive in an offensive shootout. In fact he thrives in them.

Denver can provide Manning with a good offensive line. Not only does that protect Manning, it allows him to go through his progressions and find the open man. He is a great enough QB to turn mediocre receivers into good ones, good receivers into great ones, and great receivers into Hall of Famers. So I wouldn't worry about Denver's lack of household name WRs. He'll be on a playoff team in a soft division. He has some raw material to work with in Denver. There is plenty of room for improvement, but he's quite capable of improving it.

What do the Broncos do with Tebow? Manning certainly isn't the long-term solution at quarterback, and nobody is absolutely 100% certain if Manning can play, let alone play well. The Broncos could keep Tebow as insurance/QB-of-the-future. They could also trade him. Which makes this acquisition even smarter for them. How many teams dramatically improve themselves AND acquire additional draft picks with one move?

Not an easy schedule.
Posted by rob at 11:00 AM No comments:

The Hibernating Bruins Have Awoken 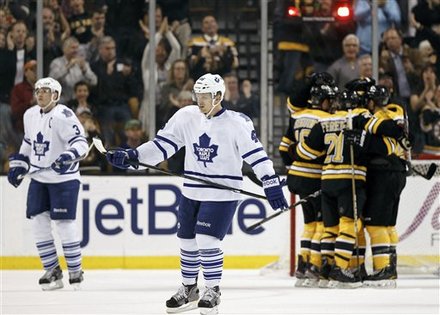 Through two periods last night, the Bruins had 7 goals, the Leafs had 7 shots. That sums it up right there. The Bruins have put together 6 consecutive periods of quality hockey, and they hadn't done that since Thanksgiving. Winter is over. Spring is here. The hibernating bears have woken up. And they mauled Golidlocks (Kessel).

The B's kept up their good habits the whole game despite the lopsided lead. Playing well meant more to them than the two points which were already in their pockets. And that's very encouraging to see.

I'm glad Thomas stayed in net for the 3rd. The idea of resting him and putting in Turco is a bit silly. How much rest are you really giving Thomas? And what if Turco lets 4 go by him in 10 minutes, you have to bring Thomas back? And it's also good to let Thomas go out there in the 3rd and try for a shutout, his 5th of the season, and first since December 17th. He only needed to make 13 saves so it's not like that 3rd period taxed him much anyway.

Joe Corvo was scratched again. And that's very fine with me. 125 minutes without him and the Bruins have played 125 of their best minutes of the season.

On Saturday the defensemen initiated the physical battles against Philadelphia. Last night the forwards followed their example. Gregory Campbell fought 30 pounds above his weight-class and held his own against Luke Schenn. Komisarek made the mistake of taking on Lucic. And he should know better by now.

However, Seguin plays the whole game. He makes defensive plays and smart passes. He doesn't hurt his team. He is an elite talent playing the within team's system. Kessel is an elite talent but struggles in systems. Kessel plays Phil Kessel's game. That's partially why he is a -7, and Seguin is a +29.

Kessel is also probably a better golfer than Seguin. That's an individualistic game which suits Kessel's attitude better. And Kessel gets much more opportunity to sharpen his skills.

To be fair to Kessel, the Leafs don't have much of a system for him to play in. And last night they surrendered when they were down 4-0. No fire, no pride, no team mentality. Just 5 individuals skating around. It tends to happen when you build your team around guys like Phil Kessel.

Bruins head West to San Jose Thursday night. The Bruins are 3 points ahead of Ottawa with a game in hand. The Senators host New Jersey tonight.