More overtimes, more injuries, more suspensions. I can't decide if these playoffs are the best I've ever seen or the worst. 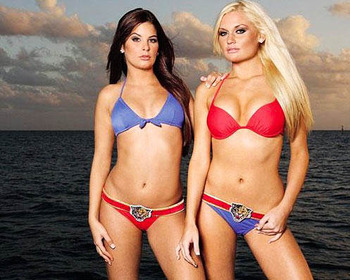 What makes the NHL Playoffs so compelling to watch is their unpredictability. Everyone figured New Jersey had the easiest draw in the playoffs. They'd roll over the 94 point Panthers. People were even pointing to this matchup as a reason to change the playoff system. But the game isn't played in theory, or by "experts." It's played by players on ice.

The Panthers were down in 3-0 less than 7 minutes into this game. They came back thanks to 3 Power Play goals. The Panthers are 6 for 10 on the PP. 6 Power Play goals against the best PK in the regular season (89.6%). The Devils only allowed 27 PP goals all season long, or about 1 every 3 games. Now they've allowed 6 in 3 games.

Another example of how regular season trends mean nothing in the playoffs. Detroit had the best home record in the NHL, with 31 wins. They've lost to Nashville twice on their home ice.

All the scoring occurred in the 3rd. The Predators have preyed on Detroit's defensive lapses. The Red Wings are all chasing the puck carrier, not protecting the area in front of the net or covering other players. The Wings outshot Nashville 41-17, but Pekka Rinne did his job, stopped 40 shots, and gave the Predators a chance to win. All three games of this series have gone into overtime but the big story of this series have been the hits to the head and the suspensions. In this game, Chicago's Marian Hossa was wheeled off the ice on a stretcher after Raffi Torres checked him in the skull. Here's the hit:

He targeted the head, he launched himself, and it could be argued that it was a late hit and a charge. Torres has an extensive history of dirty play. Exactly one year ago to the day, he did this:

Torres was suspended once already this season. Last year he was suspended for 5 games at the end of the regular season and into the playoffs. Given the nature of this hit combined with his history, he should be banned for the remainder of the playoffs.

Honestly, I don't think players like Raffi Torres belong in the National Hockey League. I don't think the League should tolerate them, merely slapping them on the wrist as they repeatedly misbehave.

The NFL released its 2012 schedule last night. And I have to say that I'm pleased with the Pats' 2012 slate of games. The Pats opponents aren't particularly tough. They'll play 4 games against 2011 playoff teams. That's the absolute minimum. And they're home against 3 of those 4 playoff teams.

The more I look at the schedule, the happier I get. The Patriots were going to travel to Florida twice this season. And both times will be in the mildness December, not in the sweltering heat and humidity of September.

Five of the last 8 games are at home. Most of the AFC East games are in the second half of the schedule.

The only rough part of the Pats' schedule is their preseason schedule. It's just weird. They open up on August 9th at home against New Orleans. Then don't play again for 10 days. Then it's the Eagles on Monday August 20th, at Tampa Bay on Friday the 24th, then at the Giants on Wednesday the 29th. Three games in 10 days. Just weird.

But I'll take the odd preseason schedule in return for the favorable regular season schedule.
Posted by rob at 12:00 PM No comments:

The NHL upheld the automatic 1 game suspension handed down to Nicklas Backstrom for his match penalty Monday night. Capitals' coach Dale Hunter tried to claim that Backstrom was acting in self-defense out of fear of receiving another concussion. But cross-checking someone's face is hardly a defensive act.

However, compared to some of the other stuff we've seen the past few days, Backstrom's transgression seems relatively harmless. He got the same discipline as James Neal, who was much more aggressive, much more reckless, much more menacing in his violation.

I'm not saying that Backstrom shouldn't be suspended. Just that the NHL needs to issue more serious penalties for the more serious crimes.

This is a big advantage for the Bruins that they must press. Backstrom has a goal and an assist in the series and was winning 56% of his faceoffs. The Bruins can now reestablish themselves at the faceoff circle. 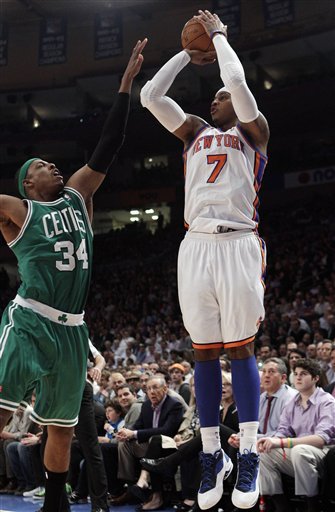 The Knicks knocked down 19 three-pointers which propelled them to a 118-110 victory over the Celtics. The C's had a chance to clinch the Atlantic Division, but they just couldn't keep up with New York's three-point blitz.

Pierce had 43 points, Rondo had 13 points with 13 assists. The Celtics starters scored 108 points. Of course, the bench only added 2.

It's a loss that doesn't carry too much meaning. The Celtics will clinch the division another day, barring disaster. And the Knicks won't be hitting 19 three-pointers in a game anytime soon. The Celtics' key players are all playing well at the right time and that's what is important as the playoffs approach.

No Surgery for Ellsbury

The Sox sent MRIs of Jacoby Ellsbury's "sublaxed" (partially dislocated) right shoulder to a specialist in California. And that doctor has concurred that Ellsbury does not need surgery to repair his shoulder.

So that's good news. Although we still have no idea how long it will take for the shoulder to fully recover. Ellsbury will continue to do rehab exercises. Estimates for his return have ranged from 4 to 8 weeks.

In other outfield news, Carl Crawford played in an extended spring training game yesterday. He drew a walk and attempted to steal a base. More importantly, he didn't feel pain afterward.

The Sox need all the offense they can get. Right now they've shown an inability to score runs with consistency. There are holes in the lineup, especially in the outfield. Those holes need to be filled.
Posted by rob at 10:30 AM No comments: 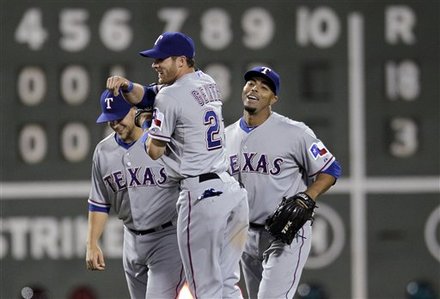 Buy some Dramamine and don't eat an hour before game time because this Sox season is shaping up to be a motion sickness inducing roller coaster ride of dizzying highs and soul crushing lows.

After two very good starts, Jon Lester dropped an utter turd on the mound last night, only getting 6 men out. He threw 80 pitches in his 2+ innings of work, only 46 of which were strikes. He allowed 8 hits and walked 4. It was ugly.

I fear that the rest of the season will be much like the first 11 games. The Sox will look invincible at times. Then at other times they'll look like a AAA team that's been drinking heavily.

But hey, Texas is good. Really, really good. I love hearing people say "there's no guarantee the Wild Card comes from the AL East this year." No shit. The Rangers have pitching. And as we saw last night, some very scary hitting.