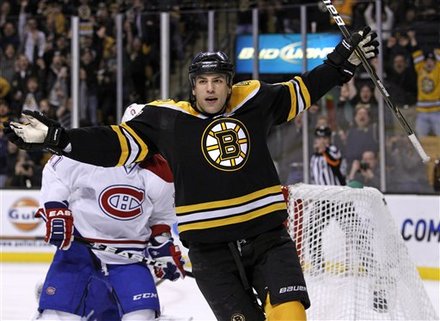 14 goals and 176 penalty minutes. That's not bad for a 60 minute game of hockey. This was pretty much the best a regular season game can get. These teams are vying for a spot atop the division, they don't like each other, and they all have personal histories. I don't know why the NHL made the schedules more balanced and reduced divisional games from 8 to 6 per opponent. Rivalries like this one have fueled hockey for decades, and I wish we could see the Bruins play the Canadiens 8 or 10 times a season.

I've been attacking Michael Ryder all year. Two years, really. Last night was perhaps his best game in a Bruins uniform, though. In the 1st period, he had numerous plays that were slightly positive. Little stuff like getting the puck to an open space in the offensive zone when there's no clear passing or shooting lanes, thus allowing a teammate to win a battle for the puck. I normally would never notice something like that, unless it was from a perennially negaitve player like Ryder.

In the 2nd period, he really came to life. And he basically scored three times, having one goal disallowed because the referees called Marchand for goalie interference when he was shoved into Price.

Horton put forth a quality performance as well. On NESN, they showed some iso-shots of him winning battles against Subban. So even without the 1 goal and 4 assists, Horton was already doing his job. But the 5 point night was also very special.

Krejci rebounded nicely from the San Jose game. I ripped him quite a bit after that one. The thing is, when Krejci has a bad game (which is rare), you get the feeling like it costs the Bruins so much more than if say Blake Wheeler has a bad game. Krejci is such a vital cog to the Bruins' offense, that when he breaks down, the machine breaks down.

Milan Lucic has scored 7 goals in his last 7 games. That's staggering. I think his going after Price was a bit silly, but why tinker with something that's working? 23 goals for Lucic this year. He only had 34 career scores coming into this season.

It's difficult to gain any perspective on games such as this, until some time has passed. Then again, this was the first time the Bruins have beaten Montreal since September 24. So that's substantial. The Bruins are also 4 points ahead of Montreal, with a game in hand. That's also substantial. This game could be a keystone on which to build a foundation of success.

The Original Six fun continues Friday night when Detroit comes to town for the front end of a home and home.