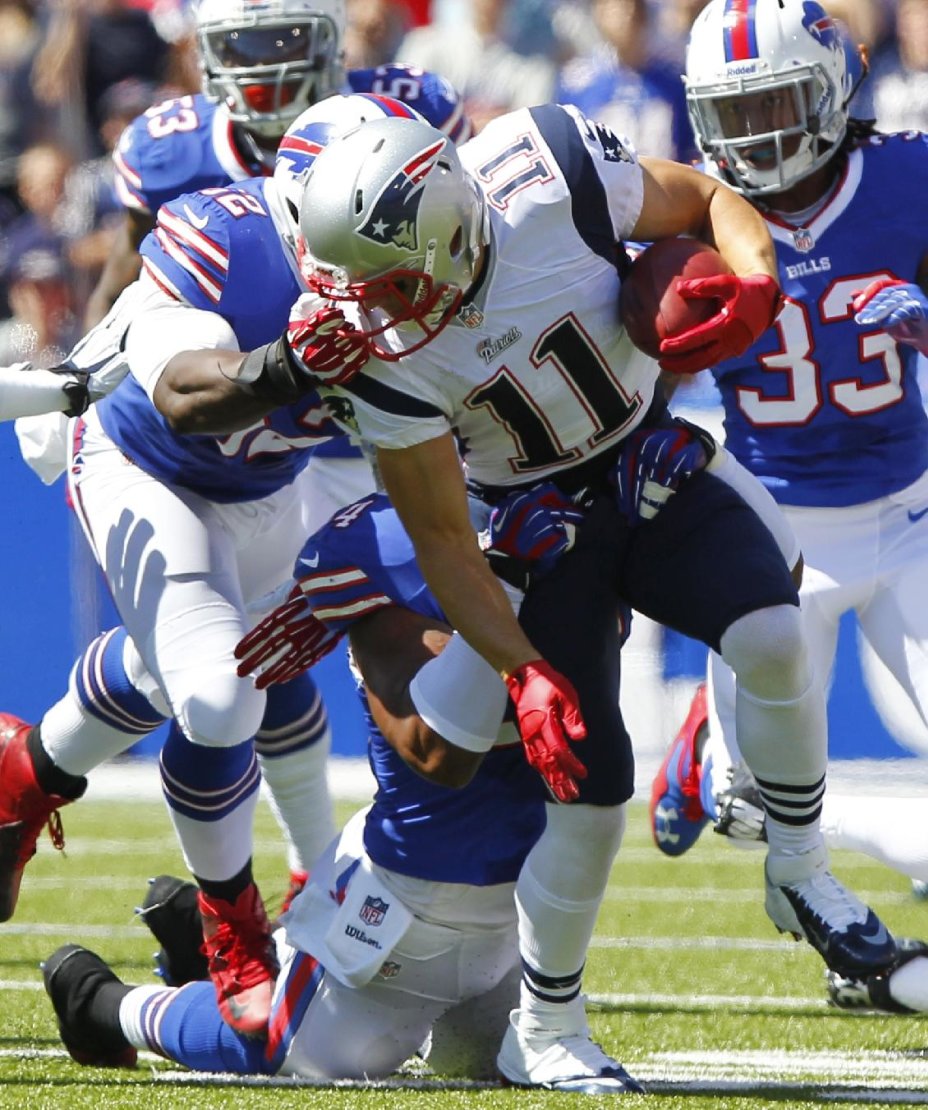 Photo Credit:
AP Photo - Bill Wippert
I honestly have no idea how to start writing about this game. It would take the talent and skill of William Shakespeare to truly express, in words, how grotesquely ugly this game was for the Patriots. And yet they won. They've had ugly wins before, particularly against Buffalo, and particularly in September. And we tend to forget them so long as the next game is on the attractive side. Hopefully we'll forget this one soon, like a regrettable drunken night during which many mistakes were made.

So I'll accentuate the positive first, then address the negatives that ABSOLUTELY MUST be corrected, then finish with a conclusion like "Week 1's goodness, badness, and ugliness only matter if they extend into Week 2."

Danny Amendola earned the respect of New England in this game. He might have a fragile, injury-prone body, but he's not frail. He's not J.D. Drew. He pushed himself through pain as Brady's go-to guy, and had a huge game. Julian Edelman got the TDs, but Amendola seemed to have every big catch in every crucial situation. When Brady needed a play, he went to Amendola.

The Patriots lost a lot of pass reception production when Woodhead left (which we forget about with the departure of Welker, the incarceration of Hernandez, and the injury to Gronkowski). If Vereen can provide a chunk of that production, it would take pressure off replacement receivers and tight-ends.

Kyle Arrington was the defensive star, forcing some fumbles. Without the big plays made by Amendola, Vereen, or Arrington, the Patriots lose and lose badly. Really, really badly.

By the same token, without all the mistakes Buffalo made, the Patriots lose and lose badly. All the penalties and turnovers killed Buffalo's momentum whenever it was starting to build. Buffalo did their best to make this an easy Patriots win. The Pats did all they could to make it difficult.

Ball control issues plague Stevan Ridley and have for years. It's one thing when Brady fumbles a QB/Center exchange. That's a one in a million miscue that could happen to anyone at anytime. Ridley has a trend of fumbling, and history seems to be repeating itself.

The rookie pass catchers looked like rookies. Kenbrell Thompkins made a sideline catch but couldn't get two feet down. It was a catch in college, not the NFL. He also didn't realize how much space he had in the back of the end zone and went out of bounds. It was a touchdown in the CFL not in the NFL. Zach Sudfeld stumbled on a route then couldn't haul in a Brady pass, which turned into an INT. Gronkowski's giant bear claw hands (which are just as sticky as bear claws) would have enveloped the ball, Sudfeld instead batted it to a defender.

Maybe these things get better as the season progresses, maybe not. They'd better.

It's a short turnaround against the Jets. Not much time to dwell on mistakes, which maybe is a good thing. Maybe the team can get back out there on Thursday and play a cleaner game. Sort of like giving the ball to a runningback the first offensive play after he fumbles. Get back on the horse and what have you.