A Good Reason to Root for the Florida Panthers Tonight

The Panthers have a chance to eliminate the Devils tonight. And not only would that mean that a team from New Jersey would be knocked out, it would also mean that one of the best goal-callers in the NHL would be happy.

Fenway Park turned 100 on Friday. You might have heard about it. It's crazy to think about a facility being used and abused each year by fans and players, and it's still standing. Fires have burnt down grandstands, floods have seeped in from the marshy Fens, and I once threw up in Section 14.

When Fenway Park opened, World War I was 4 years from starting. There was no TV, no radio broadcast of the game. People got their news from telegraph. The Civil War had only been over for 47 years.

Fenway was 28 years old when the US joined World War II. It was 57 when Neil Armstrong and Buzz Aldrin walked on the moon. It was 72 when I was born. And it will probably outlive me,

Even the flyover gave me goosebumps. An F-16 flying wing-to-wing with a P-51. That's just cool. Although the P-51 flew in Europe and the Pacific when Fenway was already 30 years old. A formation of planes ranging from a WW I biplane might have been more appropriate. Or maybe a Marine Corps F4U Corsair and an F9F Panther (the planes Ted Williams flew in World War II and Korea, respectively). But only a history nerd like myself would make such specific suggestions.

I felt like a kid as I watched the proceedings. Then I realized that this was precisely how Larry Lucchino and John Henry wanted me to feel. This was how they got Sox fans to shell out hundreds of dollars to watch mediocre players blow 8 run leads and then be happy about it. They make us feel like we're in Disney World, then they pick our pockets. And we smile as they do it.

Lucchino and Henry didn't care about the Sox until they realized it was an asset they could build up, squeeze, then sell. They see Fenway Park as a tourist attraction, not a ballpark. I used to go to games to see the Sox play. People today go just to go, because it's cool. It's the trendiest bar in town with an obscene cover charge, overpriced beer, and lousy entertainment.

So while it was cool to see Pedro, Nomar, Millar, Lowell, Wakefield, and everyone else. Knowing that it was all part of the Lucchino-Henry money making master plan gave me a bad after taste. Fenway's 100th Anniversary wasn't a celebration of Boston, or the Sox, or Fenway. It was a marketing tool. It was exploitation of the team's most valuable resource. It was about image and money, and "growing the brand," as a business person would say.

And I wouldn't care if "growing the brand" included signing a frontline starting pitcher. But it doesn't.
Posted by rob at 12:00 PM No comments:

The Western Conference quarterfinals are complete and the semifinals are set. But the East is still very much up in the air. The 1 and 8 seeds will be going to Game 7. As will the 2 and 7. And maybe even the 3 and 6.

Daniel Alfredsson returned but the Senators couldn't stop New York's Power Play. The refs called a very soft game, though. Ottawa scored after a weak roughing call. New York scored after a weak goalie interference call. I hate seeing games won and lost on Power Plays. Chris Kreider did score an even strength goal for the Rangers in his 4th game as a pro. He was playing for Boston College in the NCAA Championship just 16 days ago. Now he already has an NHL playoff goal.

Chicago started this game on fire, backed by a very vocal home crowd. They ran into a wall, though. And that wall was named Mike Smith. The Phoenix goalie stopped 16 shots in the 1st period, and 39 overall. Eventually, the Coyotes scored some Power Play goals and won their first playoff series since moving to Phoenix.

They'll face Nashville in the semis. And LA will face St. Louis. So that's Mike Smith vs. Pekka Rinne and Jonathan Quick vs. Eliot/Halak. Don't expect many high scoring games in the next round. 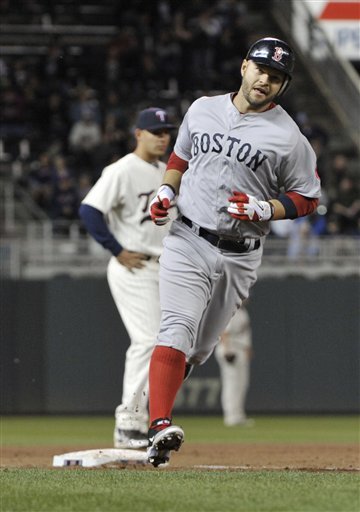 Daniel Bard wants to be a starter. And I can't blame him. But by doing such a good job as a reliever last night, he might have eliminated himself from the rotation.

He inherited a tough situation: a runner on third with 1 out in a 5-5 game. And he worked out of it. Cody Ross homered in the next half inning, and Bard got the win.

With the Sox struggling, Cody Ross has been somewhat overlooked. He hit homeruns number 4 and 5 of the year. And knocked in 3 runs, giving him a total of 13 RBI. He leads the Sox in both categories. He's also hitting .283. I don't know if this production will last, but the Sox desperately need it at the moment.

Jon Lester looked off, especially going through the Twins' lineup a second time. He allowed 5 runs in 7 innings. And if not for the 3 double plays the Twins grounded into, things might have gotten really messy. I'm not worried, though. He had bad Aprils in 2009 and 2010. And a bad May last year. Give him a few starts to warm up and he'll revert to his usual self.

The Sox needed the win. But there's still lots to work on. Morales looks awful. Aceves is unnerving. The Sox still make inexcusable little mistakes like screwing up a relay from right-field.

Those problems seem more manageable after a win, though.

Beckett faces Nick Blackburn tonight, who struggled in his first start, did well in his second, but hasn't pitched since the 14th.