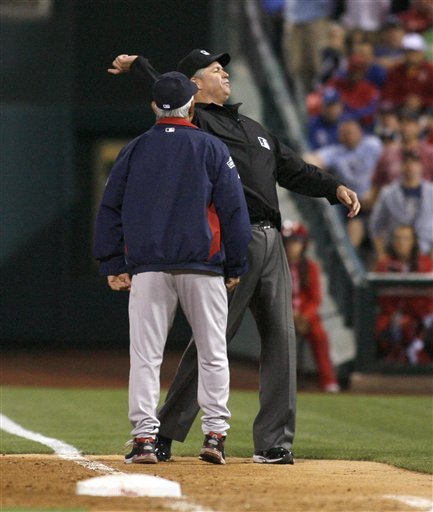 Daniel Bard isn't working out as a starter. He's not horrible. He's obviously a talented pitcher. But he's not throwing enough strikes. 5 more walks last night. He also hit 2 batters. He's walked 25 batters on the season, in 42.2 innings. He's hit 4 batters. His strikeout to walk ratio is close to even (26 strikeouts, 25 walks).

These are similar to the problems he had in the minors when he was a starter. In 2007, in 22 minor league starts and 75 innings, he walked 78 batters. He also threw 27 wild pitches. He's not as wild now, but he's still struggling to throw strikes, and hitters are being very patient with him.

When and if another starter comes off the DL, I think it would be best for Bard to go to the bullpen. When he only has to go one inning, his fastball is faster and he doesn't save any of his stuff for the second time through the lineup. He throws strikes.

On the bright side, Mike Aviles had a good night. So did Cody Ross. Aviles was 2 for 4 with a double and a homerun. Ross was 2 for 3 with a homerun. Adrian Gonzalez also hit a homerun. Unfortunately, they were all solo homeruns.

The Phillies have a reliever named Antonio Bastardo, and I find that hilarious. Sounds like the name of a mustachioed villain in a Jack Black movie.

Jonathan Papelbon got the save, his 12th of the season. He hasn't blown any. Must be nice to able to acquire talent like that.