Rob Gronkowski: no ill will toward him for leaving, no good will either 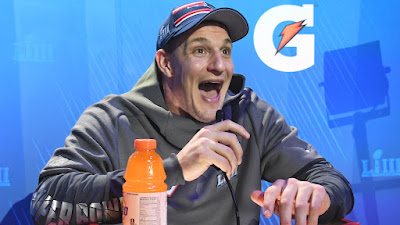 Rob Gronkowski is one of the greatest football players any of us will ever see: a game-changing pass catcher and an even better run blocker. His presence helped the Patriots revive the physically imposing style of offense they won with in the early 2000s.

Unfortunately, he didn't want to play here anymore. And that's fine. I get it. It can't be much fun to play under Belichick. You don't get the big money, you have to watch what you say and do in public, it's probably a more demanding job than many of us have ever had to deal with in our professions, and NFL players can't just decide to change jobs after giving 2 weeks notice like we can.

So go have fun, Gronk. No bad feelings.

But no good feelings either. At least not any good feelings concerning the present or future, just some nostalgia and gratitude for what you did in the past.

I'm not going to root for him. Nor am I going to blame the brain trust in Foxborough for not changing their culture and philosophy for a single player, as great as he may be, in order to keep him here. It is what it is. I'll live with the potentially alienating culture that won 6 Super Bowls, 18 division titles, and 30 playoff games. It seems to be working.

I rooted for Gronk when he was a Patriot, when there was a two-way street of what he committed to the team and what we committed to him. Gronk and his family lived like kings up here, and while he was in Patriots' blue, red, and silver that was fine. But the two way street of athlete/fan support isn't a 1,100 mile interstate highway. The street has moved down to Florida and to the NFC. So the social contract between king and subject is no longer in effect when the king moves his castle to a different land, and starts fighting under a different banner.

Especially when up here he preferred not fighting at all over fighting for the Patriots. Don't forget that. He chose to leave football over playing here. I have no qualms with that, but I'm not going to fawn over an ex-Patriot who preferred being a retired ex-Patriot over being a Patriot.

Now as for Brady, I will root for him somewhat as a Buccaneer. Because unlike Gronk Brady seemed to help push the Patriot Way among his fellow players. Gronk only seemed to tolerate it. Brady and Belichick built this kingdom on and off the field.  That's special.

Furthermore, and this is just my opinion, Gronk's "charms" are wasted on me. I find his act a little lame, and more than a little boring. We get it, you're a big goofball that smiles and dances a lot, you stick your tongue out, and the number 69 is hilarious. It's not a bad act, but not nearly unique or funny enough to merit a long-distance fan relationship.

So ultimately, no ill will for leaving. But no good will for anything on the football field since you retired. It's kind of like the first 9 years of The Simpsons compared to everything after: I enjoy the memories, but am apathetic toward your present and future.