Patriots get revenge on Dolphins 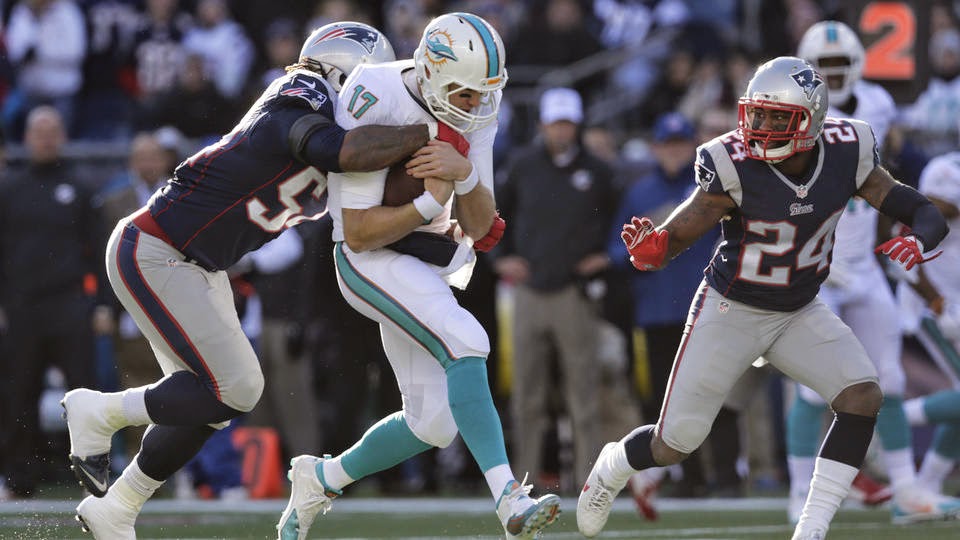 Bill Belichick was Captain Ahab, the Dolphins were Moby Dick. And unlike the climax of Herman Melville's famous novel this time Ahab caught the white whale. His crew then killed it, gutted it, and dumped its carcass in the sea.

The comparisons to the 2003 season are impossible to avoid. The Patriots played an awful game in Week 1 that year too, losing to Buffalo 31-0. Then in Week 17 they beat the Bills by the same score. The 2014 Pats similarly started their season with a turd of a game in Miami. Months later, they got a chance to show what kind of team they truly are.

The Pats dominated the 3rd quarter 24-0. But it was the first half where they won the game. It wasn't a pretty 30 minutes of football for the Pats. Less than 100 yards of offense, an interception, one drive that stalled at midfield, another that never got going. Ye the Patriots led 14-13 at halftime.

Jamie Collins' blocked field goal and Kyle Arrington's return was a 10 point swing on one play. Duron Harmon's 60 yard interception return set up an easy touchdown. Considering how the offense was sputtering, getting big returns off both those plays was crucial.

The first half was all about big plays on defense and special teams. The second half began with the offense making their presence felt. The opening drive of the half demonstrated the balance and flexibility of this offense. There were big pass plays to Gronk, Amendola, and Blount. Jonas Gray had some good runs. Brady "ran" for 17 yards, which pumped him up which in turn pumped up the crowd. Then Blount and the power run finished it.

The defense followed that by forcing a 3 and out. Miami ran 10 plays in the 3rd quarter, for 19 yards. The Pats' D forced two 3-and-outs, and caught an interception.

For the first time since 2004, the offense and defense are working together, building off the plays made by each other. They also cover for each other when either side of the ball struggles, like the defense and special teams covered for the offense in the first half.

The defense was excellent in this game. The Dolphins were 3 for 16 on 3rd downs. Four sacks (1.5 by Chandler Jones on his return), 2 interceptions, a blocked field goal, held Miami to 0 TDs in the Red Zone. No points allowed in the second half.

For the 12th time in the Brady-Belichick era, the Patriots have won the AFC East. In the first 40 years of franchise history before Brady and Belichick, the Pats had 5 division titles and 10 playoff appearances. Then they win the division 12 times in 14 years.

The Patriots have also won 52 of their last 55 regular season home games.

At the same time, winning division titles and regular season games is like buying a PowerBall ticket and winning the $5 prize. It's nice, but you want the jackpot.

It's on to New York, and a chance to clinch a first round bye. Which they can do with a win over the Jets. The Pats can clinch the #1 seed with a win and a Denver loss.