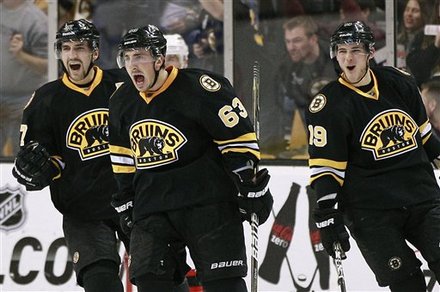 It's fitting that the Bruins achieved win #6 of their streak against the Devils. 6 as in 666, as in the Devil (even though 666 actually refers to Nero Caesar, not the Devil. Yes, I am that much of a nerd that I know that). And unlike the other games, they didn't pour 6+ goals in order to win it. They grinded this win out, against a determined New Jersey team.

The Bruins got contributions from guys who aren't on the top two lines. Gregory Campbell showed up big time, with two goal-triggering passes. He's the reason why Chris Kelly and Shawn Thornton scored goals.

The Bruins earned this one. They started a bit slower than the Devils, who came out determined. They withstood the onslaught and kept themselves in the game. And in the 3rd period, they willed their way to win. Which was extra impressive because they've been cruising in the 3rd period lately. They reached down and found that little extra something and they've now won 6 straight.

Just a bit of a tangent here: How good is Zdeno Chara? He might be the most complete player in the NHL. Obviously he's a dominating defensive force. But he plays in every key situation. The Bruins tried (and succeeded with) that set-play off the faceoff with a winger fainting wide then cutting to the center of the ice. Who has been the defenseman who made the tape-to-tape pass before both goals? Chara.

He's +9 during this streak, +10 on the season, with a goal and 12 assists. There are a handful of defensemen who have more points than that, but none of them are anywhere near as defensively stifling as Chara.

Bruins host the Blue Jackets Thursday night. They're dead-last in the NHL with a 3-13-1 record and are 0-7 on the road. This is a great opportunity for win #7 so long as complacency doesn't set in.