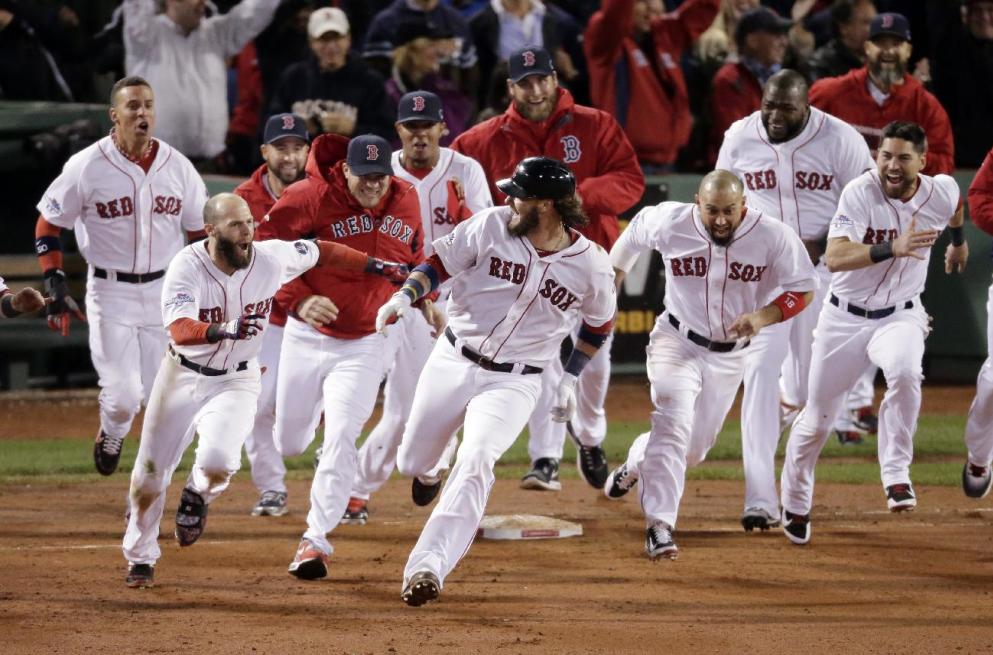 How fantastic is it to have exciting playoff baseball back in Boston? Games 1 and 2 have been "stand-while-you-watch" games in the late innings. The games are so tense that you cannot stay sitting.

How fun would it be to go to a karaoke bar with Koji Uehara and Jonny Gomes? Then go clubbing with Dustin Pedroia and David Ortiz? Then go to Supreme Pizza on Mass Ave at 2:00am with Shane Victorino and Mike Napoli?

I also think that the energy of the fans in Fenway plays a part in how the Red Sox perform. Detroit has pitched so well in this series that each time the Red Sox manage a basehit, the crowd releases several innings worth of pent-up energy. And the crowd sees how hungry this team is, and the team feels how hungry the crowd is, and they feed off each other's energies. It's a vicious cycle.

David Ortiz's grand-slam was one of the biggest hits in his storied October career. And it was, importantly, a line driver homerun. In the cold air, high fly balls that arc upward are more likely to be slowed by the cold air and fall in the outfield. Warning, physics lesson approaching: in cold air, air molecules are packed closer together, so a baseball has to push through more of them as it flies from the bat through the air. Each molecule slows the ball down and causes it to lose speed which then causes it to lose height. A high fly ball has a longer path through the air than a direct line-drive, so it has to push through more air molecules. So Ortiz's line drive went through fewer molecules than a fly ball homerun, and that's why it was able to get out. Physics lesson over.

If the series were 2-0 in Detroit's favor, going back to Detroit, I wouldn't like the Red Sox chances. Now at 1-1 the Sox aren't up against any walls. We'll see if Verlander pitches like he did in the regular season or like he did in the ALDS against Oakland. We'll see if Detroit's starters fall back to earth. The series is still wide open thanks to Sunday night's insane drama.