Why Bonds, Clemens, and Even Sosa Should Be Inducted Into the Hall of Fame

I don't like Sammy Sosa, I hate Barry Bonds, and I will laugh the day Roger Clemens dies. But all three of these PED assisted freaks should be inducted into the Baseball Hall of Fame. Because baseball can't pretend that the steroid era didn't exist, nor can it act morally superior to something that it participated in and benefited from.

The Hall of Fame is baseball's last bastion of the illusion that it is, or ever was, a pure game. That's why some are so adamantly against admitting the likes of Bonds, Clemens, and Sosa.

These so-called purists aren't defending the game, or the Hall. They're defending their own delusions. They're in denial. They think that impurity is something new to the game.

The game has always had dirty aspects to it. It was white-only until 1947. Players didn't have basic labor rights until free agency. Cocaine and amphetamines were an everyday part of the sport in the 1970s.

And the Hall of Fame has already been infiltrated by filth. Ty Cobb is in the Hall, despite the fact that he was a bigot, once beat up a crippled man, probably fixed games, and probably killed at least one person. White Sox owner Charles Comiskey is in the Hall of Fame and he was so cheap that he made his players pay to launder their uniforms. Those players eventually threw the 1919 World Series. Red Sox owner Tom Yawkey is in the Hall of Fame despite running a racist organization that was offered and declined a chance to sign Negro Leaguer Willie Mays. The Red Sox didn't integrate until 1959, 12 years after Jackie Robinson broke the color barrier.

Baseball cannot move forward from the steroid era until it acknowledges that it occurred and is a part of the game's history. The purists who don't want to see Barry Bonds's HGH swollen head on a bronze plaque are desperate to avoid admitting that their sacred game isn't as chaste and innocent as they proclaim it to be.

And these BBWA purists were the same sportswriters who failed to unearth and expose the wide-scale cheating they are now so vehemently against. These writers saw Barry Bonds's skull grow, they saw Sosa and Mark McGwire's inhuman biceps that were as big as most men's thighs, and all these writers could do was applaud. They buzzed with excitement during the homerun race between Sosa and McGwire. They marveled at the shape Roger Clemens was in despite his age. They theorized about Alex Rodriguez hitting 800 homeruns. They even explained the explosion in offense with juiced balls and smaller ballparks.

Now they're rallying against the same players whose PED aided deeds they filled their sports pages with. These hypocrites shouldn't be the ones who know prevent Bonds, Clemens, and Sosa from being inducted.

So let the freaks in. There are segregationist owners in the Hall so why not PED assisted players?

Rajon Rondo Acts Like a Moron in Celtics/Nets "Brawl" 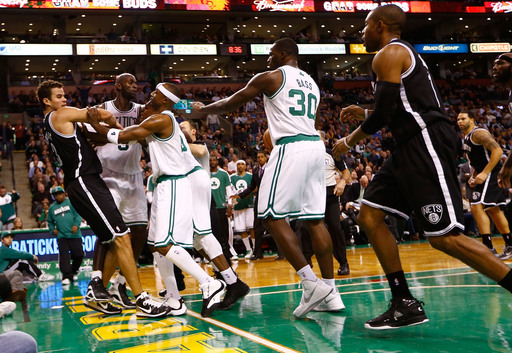 I like Rondo. I've frequently defended him when he's criticized, or when his name is bandied about in trade rumors. But this was simply childish. It was a hard foul on Kevin Garnett, but are a few shoves of vengeance worth being ejected and possibly suspended for?

One legitimate criticism of Rondo has been that his maturity level hasn't increased as much as his skill and talent have. The scrap last night is a great example of this. He let his emotions dictate his decisions, and it cost the Celtics his services for the remainder of the game. He hurt his teammates more than Kris Humphries hurt Garnett with that foul.

Photo Credit:
The Associated Press
Posted by rob at 10:00 AM No comments: