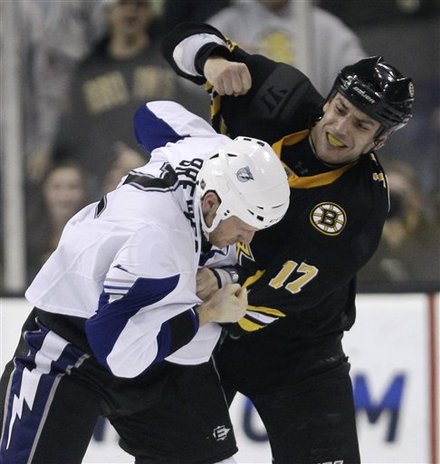 I don't think Tampa Bay is that good. They deserve their spot in the standings, but when the playoffs start, I think they'll finish them sooner than most. They fall down too much. Despite that, and despite the Lightning having played the night before, and being without Lecavalier, I was very impressed with this Bruins win.

Apart from Michael Ryder, the B's didn't do much wrong. They were a bit flat to start the 2nd, then a puck bounced off Kampfer's shin and into the net. But that woke the Bruins up. They dominated the rest of the 2nd, and had the puck for most of the 3rd.

The turning point was a nearly two minute 5-on-3 penalty kill. Thomas made some great saves, and the PK unit was smartly aggressive. Tampa Bay relies on the power play for 40% of their offense. If you shut that down, you're sitting pretty.

Lucic's game-winner came as a result of a scrum, which saw Lightning players literally tripping over each other. Horton and Krejci were in the hogpile, but Lucic was smart enough to wait for a loose puck to slip out. Like a buzzard, he circled around the carcasses, the puck came loose, and he flicked it in. Goal #28. And career point #200 for Krejci.

I loved how physical most of the Bruins played. Lucic, Horton, Boychuk, Chara, McQuaid, Thornton, Campbell, Marchand, Seidenberg, pretty much everyone. Except Ryder. Ryder gave up on easy hits, provided mere token pressure on the forecheck, and was playing a completely different game from his teammates.

After Ryder's going-through-the-motions forecheck, it was Chris Kelly who helped trigger Kampfer's goal in the 2nd. Kelly makes about half of what Ryder gets paid.

Good win over a tired, but still talented team. Saturday night, the Penguins (4th in the East) come to town.