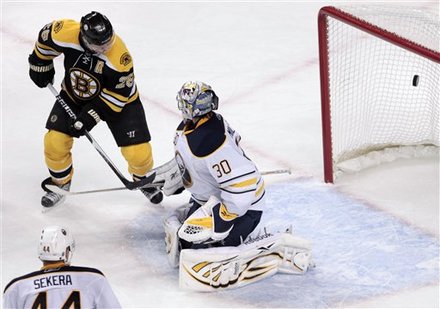 While watching the 3rd period, when the Bruins were trailing 2-1, I was going to mention in my recap how Mark Recchi hasn't done much for the offense this year. And how that entire line of Recchi-Bergeron-Wheeler was comprised of non-scorers. And just like every other time I've dared to doubt Recchi, he reminds us that senior citizens, although slow and dangerous behind the wheel, can still serve a purpose.

Recchi's tip-in goal was the culmination of a well-executed comeback. A comeback that was sparked by a Buffalo turnover of Favre-ish proportions which gave Horton a gift goal, and a comeback made possible by Tim Thomas, who also got a one-punch TKO on Patrick Kaleta. 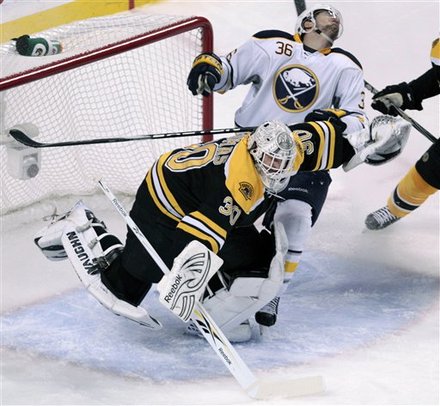 Thomas caught the charging Kaleta flush with a left jab. He also made 28 Saves, including a ridiculous poke-check in the OT that allowed the game to continue.

Nathan Horton has returned as a goal scoring threat. He's scored twice in the last 2 games, and has 4 points in the last 3. At the start of the season, his quick release, and his best-on-the-team accuracy helped propel the Bruins to an 11-5-1 (8 goals, 10 assists in that period) record. And since his drought began on November 20th, the Bruins went 3-3-2 (1 goal, 1 assist for Horton).

Thursday night, the Bruins host the Islanders, who a firm grip on the NHL's worst record, so hopefully the B's can take advantage. Because after that, there's a tough stretch of games.