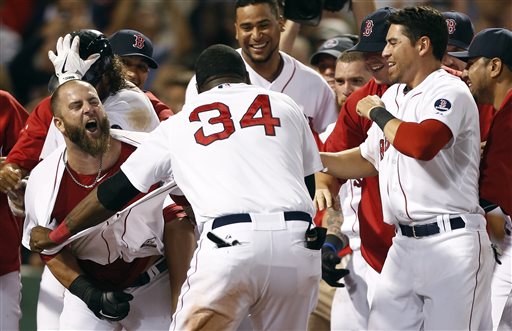 The team has character. That's important in games like Sunday night's. Ryan Dempster labored through 5.1 innings. Craig Breslow was awful. Thankfully the rest of the bullpen picked up the slack. That's what teams with character do. Matt Thornton and Koji Uehara each struck out 2 in their single innings of work. Uehara only needed 13 pitches in his inning, 10 of which were strikes. Good God I love relievers who throw strikes.

The non-pitching aspects of the game were equally non-immaculate. Three errors. The bats cooled off for 5 innings against the Yankee bullpen. But the Sox stole 4 bases. Shane Victorino had 2 of those steals, he also had 2 RBI. Mike Napoli was the big hero with his 2 homeruns and 4 RBI.

Napoli's timing was perfect. Both his homeruns put the Red Sox ahead of the Yankees.

Getting contributions from different guys every night is how this team has won 60 games. Not getting such contributions is why they lost 93 games last year. There's a completely different aura around this team. They care. They want to win. So far so good.

Here's a list of goals for the Red Sox this season, each increasing in difficulty:

#3: Be in the playoff picture down the stretch
This looks promising. The Sox have the best record in the AL. Although they're only 3.5 games ahead of Baltimore, the 2nd Wild Card team.

#4: Make the playoffs
Something they haven't done since 2009.

#5: Advance in the playoffs
Something they haven't done since 2008.

#6: Get to the World Series
You'd have been committed to an insane asylum if you predicted this before the season.

#7: Win it all
Let's not get too far ahead of ourselves, but this is a possibility.

As the Sox approach and achieve these goals, I do have one concern. Although "concern" is probably too strong of a word. There's one thing to keep an eye on: pressure.

To this point, this team hasn't had any pressure on them. They're loose. They make mistakes but don't compound them by pushing too hard to make up for them. They're relaxed. They blew a big lead last night, but it didn't faze them. Their best two starting pitchers have massive question marks around them. Their closer is done. They haven't collapsed, in part because there has been no pressure on them.

That pressure will build. Pressure from the outside as fans and media build up their hopes for this team. And internal pressure as the team has opportunities to reach goals few predicted in Spring Training. It's easy to relax against Sabathia and the Yankees in July. In September in a multi-team playoff race, scoreboard watching the Rays and the O's, that's pressure.

This team's biggest strength is its character. We'll see the true mettle of their character as the pressure increases.