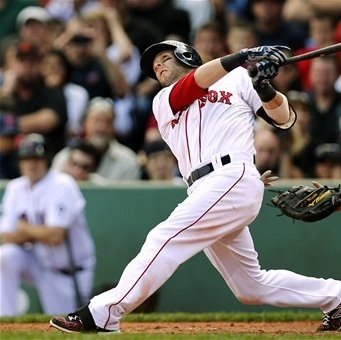 There's a seriously exciting three-way race in the AL East this year. And it's painful to not be part of it. The Red Sox are completely irrelevant, except that they might beat relevant teams and knock them out of the playoff hunt.

That's just about the only reason to watch this team these days. That and to watch players now and imagine who might be on this team in 2013, and how they might do. Last night we got to see Jon Lester, Jacoby Ellsbury, and Junichi Tazawa do well. And that can provide some hope for 2013.

Jon Lester had a decent start last night. He's been such an impossible to figure puzzle this year. He walked 7 Yankees. He also struck out 5 in his 5.1 innings. He allowed 5 hits, but only 3 of those 12 baserunners he allowed managed to score.

A fresh start in 2013 would do Lester good. He's not a guy I'd want to build a rotation around, but I don't mind him being a middle-of-the-rotation pitcher.

Jacoby Ellsbury was 4 for 5 on his birthday, with a double, 2 RBI, and the game-winning single. I'm not sold on Ellsbury, to be honest. I'll give him a pass for this season because of injuries and the sorry state of the team. But he's only had one good year in his career. He's always been about potential and only occasionally been results. And stolen bases. Scott Boras will tout him as a 30/30 man, but he's only managed to hit 10+ homeruns in one season. His career OBP is below .350.

2013 will be a make or break year for Ellsbury. Can he stay healthy? If so, can he demonstrate that he's still as good as he was in 2011? The Sox have the available funds to sign him, but will they want to?

I want Junichi Tazawa to be the #1 middle-reliever on the 2013 Red Sox. And maybe even consider him for the closer's role. He throws strikes. He almost never walks anyone. He comes in any inning any situation and does his job. He struck out 3 in 1.2 innings last night. And in 35 innings this year he's struck out 35 and walked only 5.

I don't much enjoy the Red Sox embracing their role as spoilers. There is a great race for playoff spots going on and Boston is miles away from the action. September baseball without a playoff race, without scoreboard watching, is simply a weekday distraction between football games.