Last Wednesday a pair of Boston high school students were surprised with $5,000 scholarships in a ceremony before the Celtics/Wizards game at the TD Garden. As part of the Sun Life Rising Star program, Celtics co-owner Steva Pagliuca and executives from Sun Life Financial awarded checks to Terel Andrews from the Jeremiah E. Burke School and Vicki Miranda from East Boston High School. A pair of $50,000 grants were also awarded to the nonprofit organizations City Year and Sociedad Latina, which Terel and Vicki have been involved with, respectively.

Terel is a football player at the Burke School and as part of his service with City Year traveled to Cape Verde where he volunteered as an English tutor. Among the colleges he is considering are Framingham State, Salem State, and Thomas College.

Vickie is a Youth Community Organizer at Sociedad Latina. She also sits on the Youth Advisory Board of the Nellie Mae Education Foundation and has worked the past three summers at Brigham & Women’s Hospital in the Center for Community Health. She is considering attending the Massachusetts College of Pharmacy and Health Sciences, Northeastern, Simmons College, UMass-Amherst, and UMass-Lowell.

The guests of honor were treated to a pre-game court visit. They then enjoyed the game, which the Celtics won 100-94, from the luxurious Garden View Suite. After the game, they had a meet and greet with Celtics guard Avery Bradley. They even got to try on Steve Pagliuca's NBA Championship ring. In 2012 the Sun Life Rising Star program will award two scholarships and two grants in six cities: Atlanta, Boston, Chicago, Houston, Philadelphia, and Phoenix. The program will also award four scholarships and four grants in South Florida. Since its inception, the program has awarded nearly $3 million to 54 students and 47 nonprofit organizations across the country. 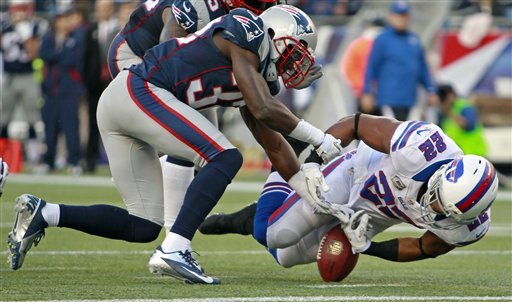 I think the 3 Super Bowls, the 21 game win streak in 2003-04, and the near perfect season of 2007 have spoiled us in New England. The Patriots are 6-3 and have a 2 game lead in their division. But if you didn't know they beat the Bills 37-31 Sunday, you'd think fans and media in this town were reacting to a loss.

I can't believe of all people, I am the one advocating for optimism here. The Pats have problems but so does every other NFL team. Is Matt Schaub an elite QB for Houston? The Giants lost to the Bengals. The Falcons lost to the Saints. The 49ers tied the lowly Rams. What NFL team is significantly or even marginally better than the Patriots?

A perfect example was in the 4th quarter yesterday when Devin McCourty forced Fred Jackson to fumble. The Patriots offense then went 3 and out, including a Wes Welker drop, and punted. They took 19 seconds off the clock.

It was only their 8th 3 and out of the season, and their only 3 and out of the game. But it came at a time when they had an opportunity to at least run out the clock a bit, move the ball close to midfield, and force Buffalo to drive more than the 45 yards they had to on their next possession.

Another missed opportunity to seal victory came when the Patriots drove into the Red Zone and settled for a field goal. Stevan Ridley's false start was the keynote of that drive's end.

The Patriots defense isn't good. The pass rush is inconsistent, some of the most talented players are also young and inexperienced, and the secondary is Swiss cheese. As bad as they are though, Devin McCourty made more big plays in the 4th quarter than Wes Welker did.

The offense has the talent, they have the capability of ending games. They don't need to score 40 or 50 points to cover for an atrocious offense. They do need to take advantage of opportunities to clinch victory.

And maybe we all need to take a step back and adjust our perspective on this team. Let's enjoy their successes instead of criticizing every imperfection in those successes. Let's hope for perfection, but accept imperfect success.

Red Sox Pursuing Mike Napoli... But Should They Be?

Both the Boston Red Sox and New York Yankees seem to be interested in the services of Mike Napoli. I'm not entirely sold on Napoli. It all depends on the price.

At his best, he's an excellent player. He's capable of an OBP above .400 and SLG above .600 and surpassing 30 homeruns. However, he's only been at his best for selected parts of his career.

He was paid $9.4 million last year after arbitration. Napoli filed for $11.5 million in that process. Considering he's only had one 140 game season, and one All-Star caliber season, I don't think he's worth much more than that. And certainly not worth a long-term deal at significant money.

The Red Sox do have money to spend, but that's not sufficient reason to spend it. Think about it. If you find a $20 bill on the street do you instantly spend it, just because you have it?

If they can get Napoli at a decent price, then he'd improve the team. The price and length of the deal is everything. I don't want to see this team repeat its mistakes by committing money to unpredictable players just because it can.
Posted by rob at 10:00 AM No comments: