You know what Fenway Sports Group does? They try to do everything differently. They can't just accept the norm and appreciate its efficiency and how well it functions. They have a compulsion to think and act out of the proverbial box. And this managerial hiring/trade is no different.

Mike Aviles is hardly an All-Star, and the Sox can easily improve in that position. So I'm not upset about losing him. It's just the notion of surrendering anything substantial to get a 2 year manager with a .475 record. What does Farrell have that the other candidates looked at don't have? What makes him worth paying a price?

I said after the Sox hired Bobby Valentine that the Manager isn't very important. He can really only hurt the team. And that's how I feel about Farrell. He might help foster a certain attitude, but such an attitude must be supported by the performance of the players on the field. Farrell, or any Manager, isn't a solution to problems. The problems are with the roster and they need to be solved on their own.

I don't mind John Farrell as Red Sox Manager, but I can't help but worry that the Red Sox selected him for reasons beyond the realm of baseball. The fans wanted Farrell. Farrell brings that notion of discipline. He knows Boston, we know him, and he knows the organization. This smells a bit like a PR hire.

When the Patriots acquired Bill Belichick, they surrendered a 1st round pick in order to sign him. It was a football decision, and it's worked out for the Pats.It was not a PR hire.

When the Sox hired John Farrell, was the decision a baseball decision? How much PR and placating the fans was involved? How much did the Larry Lucchino publicity machine contribute to this decision?

Was this about selling tickets, or winning games? I just don't know anymore with this ownership. And that's why I don't trust them. 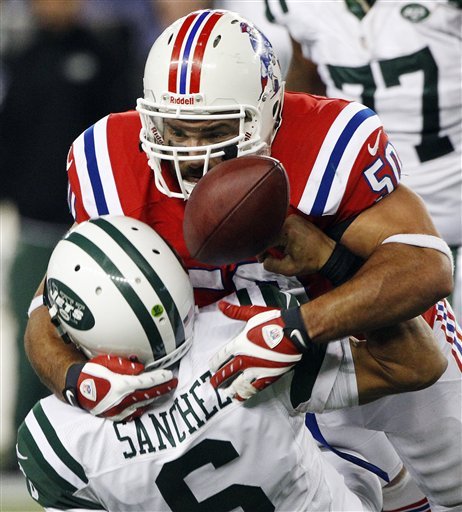 At some point this team MUST learn how to close. The difference between good teams and great teams is the ability to close games when you're ahead, and occasionally steal them when you're behind.

The Patriots didn't make game-deciding plays until very late in this game. They didn't make game-changing plays either. They dropped passes, didn't take advantage of the safety, didn't take advantage of Alfonzo Dennard's INT, or a facemask penalty on a punt. The Jets gave the Patriots chances to put them away, and the Pats refused. Instead they tried flea-flickers, and that shit needs to stop right fucking now, Josh.

This lack of opportunism is an alarming trend.

Even more disturbing is a realization I had while watching this game: the success or failure of the Patriots depends on Devin McCourty more than anyone else.

That's a scary thought, but it's true. Look at this game. McCourty returns a kickoff and the Patriots look strong. He fumbles a kickoff and the Jets almost win. His blown coverages and pass interference penalties have punctuated game-winning drives for opponents. And his interceptions have sealed victories for the Patriots.

McCourty has had much more influence over the outcome of games than an inconsistent 3rd year defensive back should have. Other players need to step up and take more control of the game.

On the bright side, a win is a win. And Alfonzo Dennard looks very good for a rookie. The Pats ultimately made enough plays to win. The Jets clearly suck. There are some things to be optimistic about.

One request, though... Football stadiums should play "Safety Dance" by Men Without Hats whenever there's a safety. Everybody would love it. All the fans would dance and if they don't dance well they're no fans of mine.

Patriots play the Rams in London next Sunday.