DOES BC BELONG IN THE TOURNAMENT? 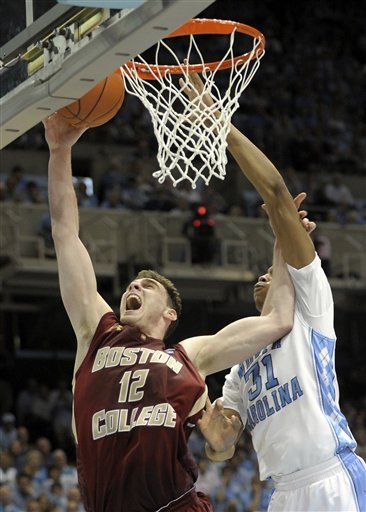 Yes. No. Maybe. Most people have them on the bubble, with their blowout win over Virginia Tech temporarily putting them in. But this post isn't about BC, or whether or not they should be in the tournament. To be honest, I don't follow college basketball closely enough to have an informed opinion on that.

This post is about the NCAA Tournament in general, and why it shouldn't expand. BC will help me demonstrate that point. Because they're not very good.

The Eagles occupy the middle of a very top-heavy and shallow ACC. Only 2 ACC teams are ranked. BC's 8-7 conference record is loaded with wins against Virginia and NC State. They did beat Virginia Tech twice, although they also lost to 9th place Miami. Twice.

Before that, they lost to Harvard and Yale. Thankfully, they didn't have to face Princeton, the top Ivy team. Princeton, by the way, only has one loss against Ivy League opponents, compared to BC's two.

BC might not even be the 2nd best team in New England (UConn being the best). They lost to URI, and they barely beat UMass and Providence. Apart from an early season, neutral site win over Texas A&M, they haven't beaten anyone impressive in or out of their conference.

They've got some good players, but no depth. And those good players all go through lengthy cold streaks. They're not awful. They're not great. If they make the tournament, it's not a joke. It's also not an injustice if they don't make it.

Finally, here's my point. If the tournament were expanded to 96 teams, BC would be a lock. They along with a few dozen other painfully mediocre teams. The field would be overly saturated by 10th place teams with .500 conference records.

There are plenty of good arguments to keep the NCAA field close to 64 teams. To me, though, this is the most alarming and convincing. This year, BC has been the quintessential bubble team. What would the bubble teams be like with 96 slots to fill? Wisconsin-Milwaukee? Long Beach State? Maybe NC State with their 15-14 overall and 5-10 conference records. The Wolfpack are 104th in RPI, and 54th strength of schedule. Why not them in the 96 team field?