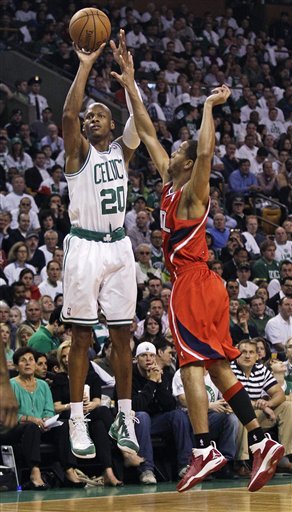 At the start of the 4th quarter last night, I contemplated turning the game off. Not out of boredom or frustration, but because I already knew how the game was going to end. Even though it did take 5 extra minutes to determine the outcome.

The Celtics have experienced pressure before. They play in one of the most sports crazed cities in the country. Most of them have played in Game 7 of an NBA Finals. The C's have played 76 playoff games since 2008. This was Paul Pierce's 113th career playoff game. Compare that to the Hawks, who play in the sports-apathetic city of Atlanta. And who do have some playoff experience, but not much as a group. And most of their playoff experience ends early.

Ray Allen returned. Which provided an emotional boost to the early part of the game, and more tangibly, 13 points off the bench. The Celtics' can't catch a break with their injuries, though, as Avery Bradley left the game with an injury to his left shoulder. It's been a problem all season and last night it "went out" according to Doc Rivers. They'll know more about that injury today, but hearing Rivers talk about not being able to "put it back in" was not a promising prognosis.

Another triple-double from Rondo in a big game. I wonder if he'll continue to get criticism for only getting those in nationally televised games. Because I guess performing your best in the biggest games is a bad thing now?

20 points and 13 rebounds from Garnett. He started this series very cold, but has returned to form. If the Celtics are going to make a run in these playoffs, they need consistency from KG. They need all their big players to play big.

Paul Pierce only shot 3 for 12 from the field but had 21 points. That's because he got to the line. 14 for 14 on his free throws. Free throws were a difference maker in this game. The Celtics had 10 more attempts, and 1o more made. Free throws kept the game close in the middle stages.

As the pressure increases on Atlanta, the quality of their performances should decrease. However, the Bradley injury could be a significant setback for the C's.