This is the 6th time the Pats have been in the AFC Championship in the Belichick-Brady era. Think about that. 6 times since 2000. Before the B-B epoch (1960-1999), the Pats had reached the AFC/AFL title game a total of 3 times.

Last week, the Patriots were fortunate enough to face the #12 seed in the playoff tournament. They also played the worst QB in the playoffs. And maybe that good fortune has extended into the AFC Championship game. Joe Flacco is the worst QB remaining in the playoffs. 20 touchdowns and 12 picks in the regular season. An 80.9 rating, which puts him 18th in the NFL, between Kevin Kolb and Carson Palmer.

But you don't need a great QB to win a playoff game. Just ask Drew Brees and Aaron Rodgers. Or ask the Ravens, for that matter. The Ravens have an excellent chance in this game, although it all depends on one thing. Can they get to Brady?

The Ravens were tied for 3rd in sacks with 48. Suggs had 14 on his own. They can get pressure on Brady. Which means the Patriots will have to rely on guys like Welker and Gronkowski to get open quickly. They'll also need that offensive line to play one of its best games of the season.

If the Ravens do get pressure on Brady and keep the Patriots' offense in check, they can run the ball, they can play possession football, and they can squeeze out a win.

It's tough to respect Flacco, though. It seems like if the Patriots go up by even 4, then Flacco will find some way to screw up.

This game will be tough for Brady and the offense to rack up an absurd number of points. But it'll also be tough for Flacco and the Ravens to do similar. I think the Patriots will win this in a tight contest. 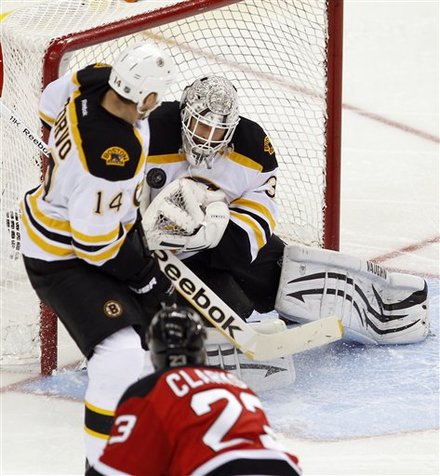 The Bruins have an uncanny ability to turn up their intensity, focus, and dominate the 3rd period of games. If games only had 2 periods, the B's would be in the middle of the pack in the Conference. But thanks to their 3rd period play, they're one of the best teams in the NHL.

It was more of that last night. The Bruins recorded the first 10 shots on goal. Thomas didn't have to make a save until about 10 minutes into the period. And by then, it was 3-1 Bruins.

Ference had a snipe that Brodeur couldn't see thanks to his own teammate trying to clear Paille out of the slot. Horton had a tip in after some nice wing to wing to wing passing on the Power Play. And Campbell's goal came after a cross-corner dump in, a Jersey turnover, and a flurry of shots and rebounds off Brodeur.

This year the Bruins have pounced on teams when there's blood in the water. They've scored 2 goals in 1 minute 14 times this year. That's absurd. Last season, they'd score a goal and then play defensively, even relaxing a little bit. This year, they score one goal, and the next line wants to add to the total.

It must be demoralizing on an opponent.

Kelly added an ampty-netter. He has 14 goals this year. His career high is 15.

It wasn't a clean game, but it was a well-deserved win. The Bruins played it tight all game, then pulled away in the 3rd period. And Tim Thomas looks to be back to his A-Game.

Now they get to host the Rangers, whose owner is already talking about his team winning the Cup. Don't think that hasn't caught the attention of the Bruins.