As we all know by now, one of the best, most celebrated day in Boston sports came to an abrupt halt when two explosions rocked the finish line of the Boston Marathon. At this point, most facts remain unclear. Emergency responders are working hard to take care of the victims, prevent any other devices from detonating, and discover who and what is responsible for this tragedy.

In a time like this sports scores and running times lose their meaning. Times like these are about people.

I feel it's important to focus on things we are grateful for when such horrors occur. Footage just after the explosions demonstrates the incredible compassion and courage of humanity. Firefighters, Police, paramedics, nurses, doctors, soldiers, volunteers, runners, passersby, all risking their lives in order to help those injured by these explosions.

It's easy to focus on how horrific people can be when things like this happen. However, it's vital to remember how caring and strong people can be in the most difficult and frightening of times.

Violence will always be defeated so long as good people outnumber and outwork violent people. 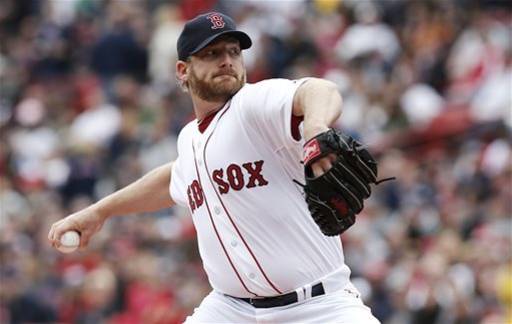 This is not the same Red Sox team as last year. Clearly. You can talk about clubhouse chemistry, the coaching staff, the baserunning, and that's all well and good. The true difference maker is pitching. And the Red Sox can only win if their pitching remains strong.

So far this season, the pitchers are reaching their potential. Last year Beckett was a bum, Lester had a wasted season, Buchholz had a crappy April. Things are so much different this year. So far. And for this team to contend the pitchers must remain at this level of quality, because the offense isn't able to bail them out.

Jon Lester has 2 Quality Starts out of the 3 he's made. He started off 2012 with 2 very good starts, then he struggled. He must remain consistently at or near this level. He's the Ace now. And the Sox rotation is so top heavy that Lester and Buchholz have to collect as many Wins as possible.

Buchholz had two things to prove this season. Could he have a good start to the season. And could he maintain durability for a whole year. He's answered the first question. And now it's about staying healthy and performing for a full season. The Sox need Buchholz. As I mentioned above, they're 6-0 behind Lester and Buchholz. That means they're 2-4 in their other games.

Ryan Dempster could anchor the middle of the rotation. And how the Sox do in those starts could be the difference-maker in the playoff race. He's looked good. Today he was brilliant, striking out 10 in 7 innings. He's struck out 25 batters already.

These pitchers have to perform. Because the offense isn't that good. Sorry folks. I know you think that aggressive baserunning and "manufacturing" runs is going to make up for the lack of power on this team. But it doesn't. And once the weather warms up and homeruns really start flying for other teams, that deficit will become noticeable.

For this team to win, they NEED a good start, they NEED the bullpen to hang on to almost every lead, they NEED to win 1-run games. They will not be able to come back from 5 run deficits. They won't win 13-10 slugfests. The offense just isn't there. The Red Sox blueprint for victory is all about pitching.

Things are once again pleasant at Fenway Park. The Red Sox have a 1-game sellout streak going. The pitchers look good. And they need to continue to look good.