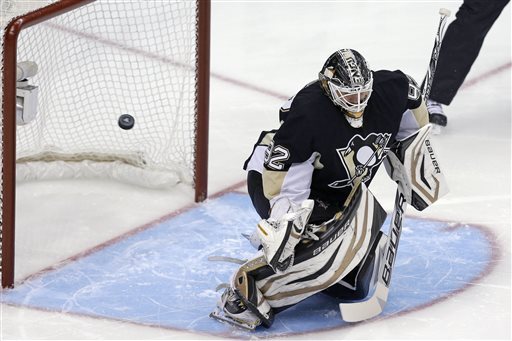 9-1. The Bruins have outscored the Penguins 9-1 in two games. Not even the most insanely optimistic, glue-huffing, delusional Bruins fan could have envisioned this. Game 1 was tighter than the 3-0 score suggested. Game 2, however, was an utter beatdown. The Penguins had no chance.

The Penguins are horrible at goal prevention. Their goalies suck. Their defensemen are not imposing at all. And their best forwards simply do not play defense. Crosby and Malkin are both -3.

Meanwhile, Rask has had his two best playoff games in this series. All 6 Bruins defensemen are doing an excellent job controlling the crease. Threatening pucks have drifted in and out of the blue paint with no Penguin able to get a stick on them because the Bruins are tying them up. And the Bruins forwards are all helping on defense.

I don't think the Bruins are playing a ridiculously physical series. It's just that the Penguins have no answer for the potential of physical play. Deryk Engelland against Milan Lucic? Really? And what "power" forward can match Chara?

And what does Crosby, their fearful leader, do? He flops like an NBA player. Actually, it's more like a Brazilian soccer player. Then after his dives he takes forever to get up off the ice. Then he skates to the nearest zebra and whines for 30 seconds.

This sense of entitlement, and this notion of expecting the game to play out a certain way is one of the reasons Pittsburgh is down 0-2. Maybe they got cocky after disposing of the Islanders and Senators, who were probably the 16th and 15th best teams in the playoffs, respectively. Now they're being challenged with talented forwards, intelligent defensemen, and a tough goalie. Things aren't going to plan and the Penguins don't know how to handle it.

On the flip-side, what Pittsburgh defensive pairing is going to go against the best line in hockey these days: the Krejci line? Who are Pittsburgh's shutdown d-men? Leading up to this series we were worried about matching up against the Crosby and Malkin lines. Who does Pittsburgh have to contend against the Krejci and Bergeron lines?

The Penguins have built a team to score goals, not prevent them. They're kind of like the 2007 Patriots or the 1995 Cleveland Indians. They can win with offense, but can't win any other way.

This series is still young. The Bruins, hopefully, smell the blood in the water, and will strike at these wounded Penguins like a pack of hungry killer whales.