Disclaimer: This isn't in any way true, nor is it even rational speculation. But everyone else in New England is reporting all sorts of stuff about Welker, from he and the Patriots being close to signing a deal, to Welker having "mild disdain" for the team and how negotiations went last year. This story is based on nothing.

Wes Welker is done with football. The rampant speculation out there in the Boston Sports Media is a mere screen for the truth: that Welker will be moving on from the game. He will be testing free agency in the world outside of sports, and attempt to find employment utilizing his Management degree from Texas Tech.

Professional football is also a very limiting business. There are only 32 franchises to choose from, in 31 markets. Welker's Management degree can provide him with opportunities in any city in the country. In the world, actually. How many times can you visit Orchard Park, NY until you get sick of it and want to travel across Europe or Southeast Asia? Welker might particularly enjoy Asia, where his height of 5' 9" would be above average (in China men have an average height of 5' 5.5" and in Japan it's 5' 7" and Indonesia's men are an average height of 5' 2"). Welker can finally be the tall guy in the room.

Finally, no matter what football team Welker could play for, there's very little room for advancement. He's hit his ceiling in the football industry as Starting Player. It would take years for him to rise above that position and enter Coaching ranks, and next to impossible for him to reach the level of CEO or President or Owner. I think Welker would rather start his own business, where he can run things the way he wants to run them. He can decide which direction to go instead of running routes in a playbook written by someone else. 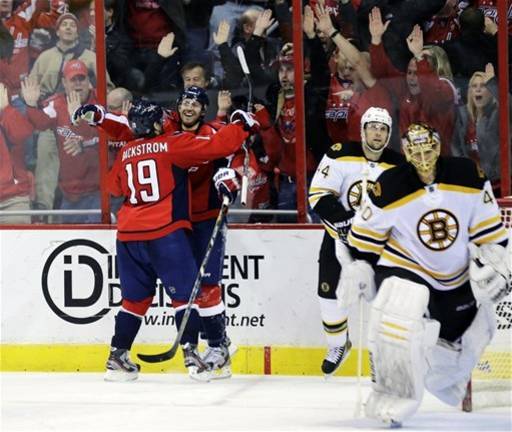 Last night was a great chance for the Bruins to pick themselves up after a tough divisional loss. They came out strong, apparently unfazed by the loss to Montreal or the chatter that followed. They even scored a Power Play goal.

This team is rarely up by 3 goals, and maybe that's a good thing. They seem to play worse when up by 3. They play their best when leading or trailing by a goal or two. When they get a 3 goal lead, they settle in. That pattern repeated itself last night.

Look at Washington's OT goal. Four Bruins on the ice, none skating with any drive or purpose, just floating around on the ice.

The Bruins didn't do much to add to their lead once they went up 3-0. Here's an alarming fact, not a single Bruins forward scored a goal in open play. Marchand scored a penalty shot, and the other two goals came from Chara and Hamilton. The lack of offense from forwards not named Marchand is a problem for this team. And they're getting almost no production from the 3rd line.

Then there's Rask. He wasn't bad. He wasn't great. He only saw 26 shots, and only saved 22. This team can't rely on Rask to play like a robot night in and night out. They have to make more plays in front of them. And they need to string together 3 consecutive periods of quality play.

Photo Credit:
AP Photo/Alex Brandon
Posted by rob at 10:00 AM No comments: