Everyone thought the Flyers had an unfairly tough draw in the opening round. 103 points and they had to face the Penguins. While the Devils (102 points) got to play against the lowly Florida Panthers. But the Flyers dispatched the Peng-weenies (horrible nickname I've just made up) in 6 games. The Devils needed 7 games and a double OT to beat the Panthers.

The Flyers are scoring, but also giving up too many goals. If Bryzgalov can settle in, and the patched up Philly defensemen can avoid mistakes, they'll have a pretty good chance to win this series. Claude Giroux had 6 goals and 8 assists against the Penguins. He doesn't need to replicate that absurd production (in an 82 game season that rate of production would result in 82 goals and 109 assists), nor does Danny Briere have to score 5 goals. But the Flyers have multiple scoring threats that will keep Brodeur busy.

Brodeur looked shaky at times against Florida. The Flyers will take advantage of that. He turns 40 next Sunday and his age is starting to show.

I think Bryzgalov will have a solid series. He won't steal any games, he won't dazzle, but he'll be good enough to allow his forwards to score 3 goals in order to win. 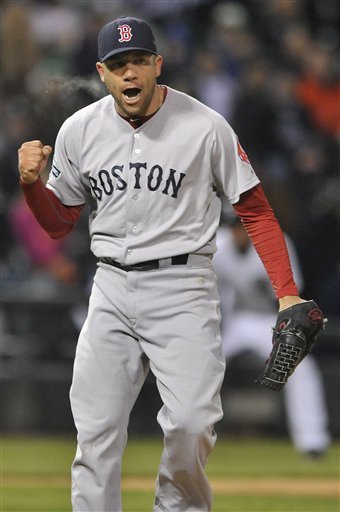 It was a tight pitching duel. And the Red Sox emerged superior. Jake Peavy threw a 4 hit complete game. But it wasn't enough against Jon Lester and the suddenly reliable Red Sox bullpen.

It was Lester's first Quality Start since April 11th. And his first win of the season. He's suffered from slow starts to seasons in the past, so perhaps this outing marks the end of that slow start and the beginning of his more predictable and higher quality pitching.

Lester's the Ace of this staff. By default. Beckett is too unreliable. So it's good to see Lester having a game like this, and finally getting that first win.

The Sox look to make it a perfect road trip this afternoon. Beckett faces Gavin Floyd. Floyd is 1-3, but he's pitched well. Could be tough.