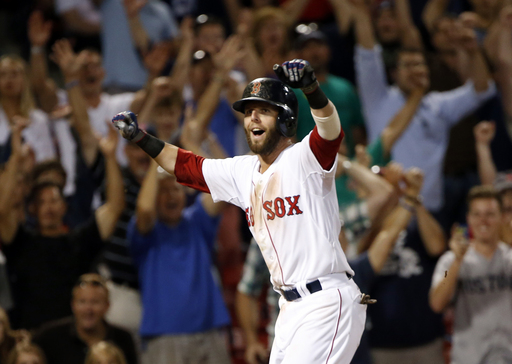 I have a feeling that the playoff races in the AL will come down to a very small number of games. So it's vital that the Red Sox are able to win games like last night's/this morning's. Especially with Felix Hernandez starting for Seattle tonight.

You can't say enough about the Red Sox bullpen in this one. After Tazawa blew the lead in the 8th, the pen combined for 7 shutout innings and worked its way out of jams. After the pen worked so hard, I think tonight I'd leave Ryan Dempster in as long as possible, even if he's struggling, just to give those relievers a break.

The Sox offense was shut down for 7 innings last night. Between Dustin Pedroia's 2-run homer in the 7th and Brandon Snyder's double in the 14th, the Sox made 20 outs between hits.

But as this team has done all season long, when one group struggles, another group picks up the slack. The offense wasn't scoring, but the bullpen wasn't letting Seattle score. And finally the Sox worked some walks in the 15th and with 2 outs Stephen Drew knocked in the game-winning run.

And let's not forget John Lackey's night. It was a solid 7 inning, 3 run performance, scattering 8 hits, striking out 6. Last year had he allowed 8 hits, he probably would have let up 5 runs in 3 innings. This year he's able to work through outings and come out with a result. He's a completely different person on the mound.

With Tampa Bay losing 7-0 to Arizona, the Sox are back in first place by half a game.

As I mentioned earlier, King Felix goes for the Mariners tonight. Maybe the Sox can get him out of the game and get to Seattle's depleted bullpen.