The Red Sox are halfway through the regular season. They are 50-31, in first place of the AL East by 10.5 games over Toronto, 11 games over New York, 14 games over Baltimore, and 17 games over Tampa Bay. The Red Sox have the second best record in baseball, slightly behind the Angels and slightly ahead of the Indians. They are 25-14 at Fenway Park, and 25-17 on the road. They are 16-9 against Eastern divisional opponents, but have yet to face the Devil Rays. They're 9-4 against the Central, and 13-12 against the West. They finished Interleague play with a 12-6 record.

What's interesting about our lack of offense this season is that our off-season focused on improving our run production. We signed JD Drew and Julio Lugo to bolster the offense. Lugo has been a wretched disappointment, hitting an abysmal .189. Last season, Alex Gonzalez hit .255, which is hardly earth-shattering, but was better than Lugo's effort in 2007.

Jason Varitek, Kevin Youkilis, and Dustin Pedroia have all increased the production of their positions compared to last year. Mike Lowell is also producing well. JD Drew hasn't done as well as hoped, but he hasn't been a complete hole.

His strikeouts are slightly lower than normal. In his career, Manny has struck out once every 5.31 plate appearances. This season, it is one strikeout every 6.67 plate appearances. On the surface, this is good. Strikeouts are non-productive outs, and are typically indicative of a poor at-bat. However, coupled with Manny's walk numbers this year, something else becomes apparent.

Manny is seeing 3.83 pitches per plate appearance. Last year, he saw 4.16. The 3.83 pitches per plate appearance is a career low for Manny since he became a full-time player. Manny isn't working the count. He isn't waiting for his pitch. It isn't that he's falling behind, it's just that he isn't letting himself get ahead. Manny is one of the smartest hitters I've ever seen. He works pitchers, he sets them up, gets his pitch, and pounces. This season, it isn't that there is much wrong with his swing. He's just swinging at incorrect pitches. Maybe, he'll be a tad bit more patient in the 2nd half of the season. If his production returns to the lineup, the entire offense will benefit dramatically. If he's hitting like normal, we'll score 20 to 30 more runs in the 2nd half of the season than we did in the first (if everything else stays the same, of course). 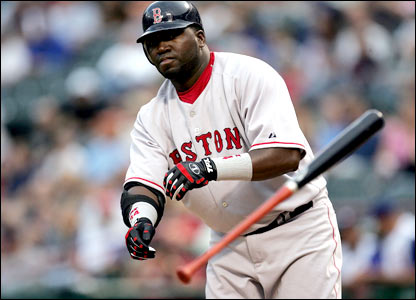 David Ortiz is also not producing what we're used to seeing from him. He's been very good this year. His OBP and average are actually higher than last year's totals. But his slugging is down. Last season, he hit 54 homers. He's on pace for 26 this year. While his homers have been cut in half, his doubles have doubled. He's on pace for 54 doubles. He had 29 last year. Considering his lack of homerun power, his RBIs aren't down that much. He's on pace for 98 RBI, which is good considering the lack of leadoff production we've had.

If David and Manny get to hitting the way we're used to seeing them hit, our offense will be very productive.

Julio Lugo is on pace to have one of the strangest statistical seasons I've seen. He's hitting .189 with a .260 OBP, and slugging .281. He's also on pace to steal 40 bases, and knock in 68 RBI. But he's only on pace to score 66 runs, and THAT is the major problem. He can steal a base every time he gets on, but he hasn't gotten on at all. Actually, he's stolen a base once for every 4 times he's reached base safely. Even before his 0 for 30 stretch, he was a disappointment at the plate. He's also got 9 errors in the field, which doesn't help much. That's not an obscene amount of errors, but we've seen short-stops like Gonzalez, Reese, and Sanchez struggle offensively, but still play great defense. Lugo is not contributing offensively or defensively.

Right now, the short-term solution is to play Cora some more. I wouldn't be shocked if we were trying to acquire another middle infielder in the trade market. The Red Sox have the lowest leadoff production in baseball.

Crisp and Drew have been less than stellar, and Wily Mo has struck out 40 times in 107 at-bats. But we've got Jacoby Ellsbury and David Murphy down I-95.

If the Red Sox can somehow generate 450 to 470 runs in the 2nd half of the season, they will finish with the best record in baseball, so long as the pitching holds up.

Our pitching has been sensational. Josh Beckett is on pace to win 22 games. Daisuke has settled down and now sports a 3.80 ERA and a 9-5 record. Tavarez has been very solid for a #5 pitcher, on pace for 170 innings with a 4.39 ERA. As of late, he has been much better.

Schilling has been mediocre on the whole, with spots of brilliance and spots of dullness. He can bitch and moan about people who don't "play the game" but he needs to sit down, shut up, stay on the DL, and return if AND ONLY IF he can help this team win more than a guy like Tavarez is helping us win. Up to now, he hasn't really done that consistently enough.

Kason Gabbard has filled in adequately as a spot starter, and Jon Lester should be returning, but I really think that the Sox could use another front line starter. If we get a good #3 pitcher, we'll have a great post-season rotation.

The back end of the bullpen is great. Papelbon and Okajima are the best finishing combination we've had on the team in a long time. Before them, Donnelly is having a solid season. Lopez has been a mediocre reliever. Nothing special, nothing horrible. Snyder has been a good middle reliever. Apart from these guys, however, the bullpen is lacking. Pineiro and his 5.04 ERA are essentially useless in any close fought game. JC Romero has already earned his walking papers. Mike Timlin looks healthy, but the 41 year old cannot pitch two days in a row, cannot pitch to more than a few batters, and really doesn't look sharp anymore.

The Sox bullpen might get some help when and if Lester is ready to pitch. This will shift Tavarez in there. Another form of relief for the relief will be if we use Gabbard and Bucholz late in the season out of the bullpen. We do need some additional bullpen depth for the playoffs, particularly with looming question marks over Wakefield and Schilling.

All in all, it's been a very good season thus far. However, we were 50-31 at this point last season, only to go 36-45 to finish the season, missing the playoffs. This team is very good, but is still very vulnerable. We haven't locked up the division, but it is in our hands. We might drop it, if we aren't careful. More importantly, this team still needs work before it will be good enough to make a strong playoff run. That work might come from Pawtucket, it might come through trades, it might come from within. But it has to come, or yet another 50-31 start will be meaningless.

After dropping two straight to the lowly Rangers, the Red Sox ended their 4 game series with a 7-3 victory.

The game was highlighted by the speed of Jacoby Ellsbury. He reached on an infield single in the 2nd and came around to score. He stole a base in the 4th, distracting the pitcher beforehand, and scored from 2nd on a Wild Pitch.

But other performances were also noteworthy. Kason Gabbard pitched great with the exception of a few pitches in which he allowed a walk, a single, and a 3 run homer. The single was the first hit of the game for the Rangers, coming in the 5th inning.

Kason obviously still needs some more innings in AAA before he can be relied upon as a full-time starter for us. However, he has shown some flashes of good pitching which not only demonstrate his value as a prospect, but his potential immediate value as a reliever in the late season and post-season. I know it's a strange time to be theorizing like this, but I've always felt that the best relievers were starters who didn't have to hold anything back and could throw their entire arsenal in an inning or two. Guys like Kason could prove valuable in our shaky midsection of the bullpen.

Eric Hinske and the bottom third of the lineup spearheaded the offensive effort. Varitek, Hinske, and Ellsbury went a combined 6 for 10 with four runs, 3 RBI, 2 walks, and pretty much all of our offense.

The Sox had difficulty in maximizing their offensive opportunities. They left 10 runners on base, five of whom were in scoring position. Seven runs is good offensive production, but the recent lack of offense has been due mostly to an inability to deliver big hits with runners in scoring position, as well as to have big offensive innings. But the 7 runs was good enough for a win, so let's not dwell on negativity too much.