Bruins Get a Case of the Mondays 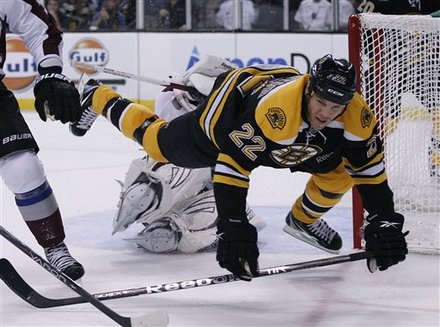 Uninspired. That's a good word to describe the Bruins' effort Monday afternoon. A few players played hard, Tuukka Rask played well, the Bruins just didn't seem to want to win as much as the Avalanche.

Give some credit to Semyon Varlamov (Voldemort), who made a few big stops. But the word "few" is the key part of that sentence. Only 30 shots on goal, 18 in the first two periods. Few of these shots were very good. The Bruins would enter the zone, shoot from 30 feet out, before anyone was in position to capitalize on a rebound, and Colorado would recover the puck. But Varlamov did have some outstanding stops.


The first line hasn't been productive. I think part of the problem is a rusty Nathan Horton. He was slightly off-balance for a scoring chance against Philly, and he was off balance in that 2-on-1 with Lucic. Varlamov didn't have to respect Horton's ability to shoot because Horton was too extended to shoot.

I wouldn't mind seeing Marchand or Seguin on the top line. I'd rather keep Marchand with Bergeron and Peverley. But until Horton gets his legs back, why not utilize a strong-skating Seguin on the most talented line?

A road trip isn't a bad thing at this point. Bruins are in Raleigh to play the Hurricanes on Wednesday, then Chicago on Saturday. A few days away from Boston might allow this team to focus and work.