On Sunday Patriots rookie defensive lineman Chris Jones made history by being the first NFL player to be penalized for pushing his own teammate into other people. NFL Rule 913 (2b) was adopted before the season, but had not been enforced by the League's officials. Although it had been violated. So much so that the League emphasized enforcing the rule in a weekly training video distributed to officials. This video included footage of the rule being broken this season, and no penalty flags being thrown.

So a rule that hadn't been enforced for 6 weeks and 93 games finally got called in overtime on a potential game-winning 56-yard field-goal attempt. The resulting 15-yard penalty moved the Jets from hopeful field-goal range, to probable field-goal range.

We should remember that even if there hadn't been a penalty, the Patriots were not assured of victory. Their offense struggled all day. Who knows what would have happened.

And I do appreciate the intention of the rule. If two behemoth linemen are engaged at the line of scrimmage, using every ounce of strength against the other, then a third person uses their strength and weight to help push their teammate forward, it could become unsafe. And such plays have ended in injury.

Then again, how many plays in football are unsafe? Should we ban receivers from crossing the middle of the defense, or outlaw quarterbacks scrambling, or try to eliminate blocking from the game entirely? Safe football is an oxymoron.

And why is the penalty so harsh? You lose 15 yards because you push your teammate into the pile? So this penalty has the same consequence as decking a defenseless receiver or bodyslamming a quarterback to the ground. Does that make sense?

Except that for 6 weeks this rule wasn't enforced. Then the League decided to enforce it. So the officials knew about this change. Did the teams know that the League had instructed its officials to look for this violation? Because if you fail to enforce a rule for 6 weeks and 90+ games, then decide to enforce it to the letter without any notice, that seems a bit odd. And if the motivation behind the rule is player safety, wouldn't you want to tell the teams that it will be enforced, so that they might emphasize to their players that it might be enforced, so then it ideally won't need to be called? If something is illegal because it is dangerous, isn't it better to prevent it from happening at all than to catch someone in the act?

Maybe the NFL does inform teams of such things. And if they do, then the onus is on the coaching staff to pass that information along to the players.

Although I'm not so sure the NFL does a good job of explaining these rules to teams. In September there was an online article that discussed this rule, and stated that players from the "second level" could not push their teammates who had been on the line of scrimmage. That was how the NFL explained the enforcement of the rule.

This article was altered Sunday evening, not long after Bill Belichick's press conference. It now reads that pushing of any kind is illegal.

For the record, the NFL rule book stipulates that pushing teammates into the pile on a field-goal or PAT is illegal, and doesn't specify which players pushing which other players is illegal. So the rule was properly enforced Sunday, it just wasn't explained very well in September.

The NFL tried to clarify the rule, yet their explanation only muddled things.

Some might think this is justice for those evil Patriots to finally be punished for their history of rule violations and also karmic retribution for the Pats benefiting from things like the Tuck Rule. Some might find it fitting that the team that brought us SpyGate was undermined by a video, this time an NFL officials' training video.

All I see is a defensive linemen doing what he's been doing all season long, then getting penalized for it. I see two sets of large men pushing into each other. One of those men, Jones, barely pushes his teammate forward while he's trying to move forward himself. Then I see a referee throwing a flag, and a ball moved 15 yards forward, and a game being won because the League decided that Week 7 was the time to take a stand on the relatively innocuous thing that Jones was doing.

There's no grand conspiracy. It's just stupid. And silly. Rules are rules, but enforce them from Week 1 if they're in the book. And don't explain the rules one way, enforce them another, and then go back and change the explanation to suit the enforcement. That's ridiculously sketchy. Thankfully, Tom E. Curran noticed the modification.

The Patriots had ample opportunity to win that game before the penalty. And the responsibility for the loss is solely on them. However, the absurdity of the situation should not be ignored. It's ridiculous that a 15-yard penalty resulted from a harmless play that looked like a million other plays. Meanwhile 4 quarterbacks left games with injuries this week. Good job protecting players, NFL.

Patriots Did Enough to Lose Before the Call 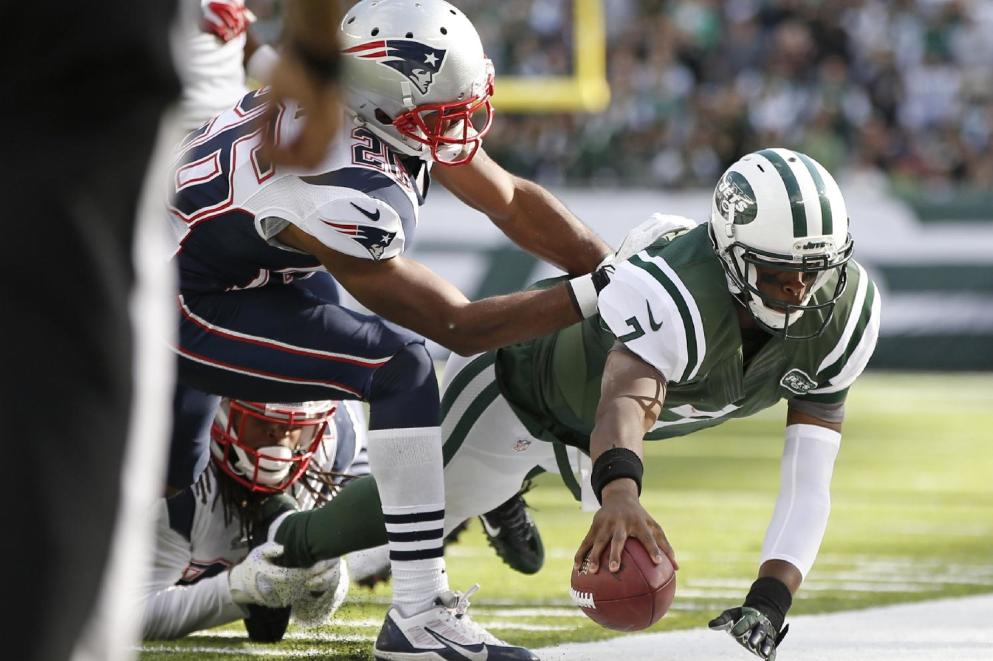 I'm not going to discuss the 15-yard pushing penalty in this recap. There will be a discussion of that in a separate post. The Patriots did more than enough on their own to lose Sunday's game. And victory shouldn't be dependent on the officials (or anything else you can't control, such as the weather) being perfect or going your way.

The 2013 version of Tom Brady does not look like any previous year's model. People have been blaming his lack of talented receivers for his lack of performance, but we've seen that Kenbrell Thompkins and Aaron Dobson can play, Julian Edelman is a quality receiver, and now Rob Gronkowski is back. How many more weapons does he need to complete more than half of his passes?

The interception he threw came at a time when the Patriots had all the momentum, had an 11-point lead, the Jets had been struggling to get first downs, and Brady throws a flat ball intended for Gronkowski and Antonio Allen jumped on it. The first step in the Jets' comeback was taken by Tom Brady.

However, I don't think he's on the proverbial Back 9 of his career. We saw against the Saints that he can still make the amazing throws. I don't know why he's been inaccurate at times. I'm sure sports-radio callers will concoct a number of ingenious possibilities. "He spends too much time with his kids," "He wants to screw Belichick for not signing Welker," "He's trying to get traded somewhere else."

By now he should know how fast Dobson and Thompkins run in order to hit them in stride. Maybe Brady is the one who's struggling to adjust, trying to throw to a set of receivers who don't make phenomenal catches on inaccurate balls in their general vicinity. Welker, Hernandez, and Gronkowski could catch anything near them. Now Brady actually has to make accurate throws for his non-Pro-Bowl receivers to catch.

The Pats defense sucked for three Jet possessions, then they suddenly stopped the run and hassled Geno Smith. After those three drives the Patriots held New York to 38 total yards on their next five drives. In the 4th quarter the defense gave the ball back to Brady and the offense multiple times, and in OT they forced the Jets to try a 56-yard field goal.

The defense did their job, without Wilfork, without Mayo, without Kelly, without Talib. The defense only allowed two offensive touchdowns. The offense didn't hold up their part of the bargain.

Here's a frightening stat: the Patriots have only managed to score 9 points in the 3rd quarter this season. That's 9 points in 7 quarters of football.

This game was a great opportunity for the Pats to push themselves higher than the Jets, as well as the Dolphins who lost in Buffalo. And the Pats didn't take advantage.

How good will Brady be going forward? I don't know. It's not to the point where you're worrying about how he'll do. He's still Tom Brady. He's had bad games before. He's capable of doing better and hopefully that's exactly what he does.

Photo Credit:
AP Photo/Kathy Willens
Posted by rob at 10:00 AM No comments: