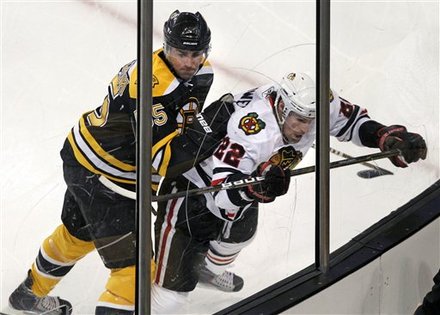 On paper, wins over Montreal, Philadelphia, and Chicago in a 6 day span is pretty impressive. But Montreal were menstruating, the Flyers were flatter than Kiera Knightley, and the Blackhawks were sleepy. I watched the end of the Detroit/Chicago game on Monday, and it was a brutal grinder. So I'm not overly enthused about the Bruins' 3-0 win over the exhausted Hawks.

Then again, it's not as if the B's lost to a tired team. They did what needed to be done. And when Chicago was able to muster the strength to play hard, the Bruins matched their intensity.

Oh yeah, and Tim Thomas is unbelievable. His GAA dropped below 2 thanks to his 9th shutout of the season.

These have been nice wins, but they've hardly been tests. Which is why I'm not letting them influence my feelings about this team in the playoffs. Right now I'm just anxiously awaiting the start of the playoffs on April 13.

Shawn Thornton is a savage. He gets his forehead sliced open by a skate, then on his way to the bench someone from Chicago says the wrong thing (I'm guessing a tampon joke), and he wants to fight the guy.

Thornton received 40 stitches. He also said of the Blackhawks chirping at him: "If I ever find who it was, I'll deal with it my own way." And I believe him.

Bruins next play a team that will probably be very motivated. The Maple Leafs come to town on Thursday, only 5 points out of a playoff spot.