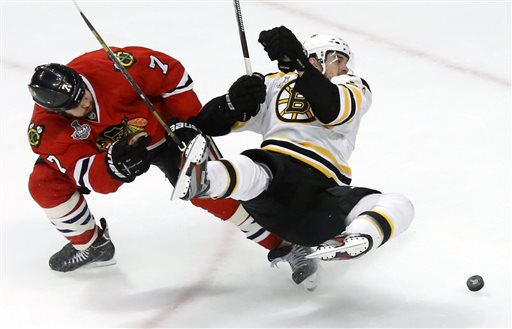 The Bruins were up by 2 goals with 12 minutes left. They then blew that lead. Sound familiar?

And anyone that actually watches hockey knows that the Blackhawks are never out of it, even down by 2 with 12 minutes left.

Nobody thought Torey Krug would be a liability. He was a surprise benefit in the Rangers series. The Penguins never did much to exploit his inexperience. I think we all forgot that he is an AHL defenseman playing against the best team in the NHL. His foolhardy giveaway, in an exceptionally dangerous part of the ice, will all his teammates moving forward for offense, was unforgivable. I think it's time to switch Krug out for Dougie Hamilton, who has demonstrated a more thorough understanding of the defensive system the Bruins play. If a pass isn't there, don't chance it. Wait for the smart play to present itself.

I think we all know now that this will be a long series. The Blackhawks are not a team that is going to give up games without a dogged fight. They stole this one.